Not a day goes by where Bryson DeChambeau isn't hitting drives as hard as he can at a driving range. 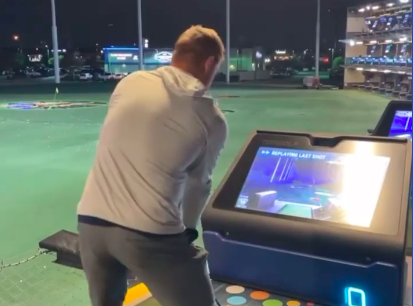 Bryson DeChambeau has been enjoying some well-earned time off from the PGA Tour and he has spent much of his holidays hitting bombs and maintaining his strength and conditioning.

Since winning the Ryder Cup for the first time with Team USA, he has been on holiday to the Bahamas to bask in the sun and hit drives into the light blue sky.

The World No. 7 has also been testing some new Cobra Prototype 3D Printed irons, a development that DeChambeau seemed very excited by.

As well as potentially replacing his one-length clubs which he has used since 2016, he has also been training hard at home with his new Proteus Motion machine which provides a force of resistance while you hold and perform your golf swing.

The road to success for DeChambeau is neverending and another video emerged of the former US Open champion hitting driver at a Top Golf venue in America.

The footage shows DeChambeau taking aim down the popular golf venue and ripping a driver, much to the amazement of the people who watched him go.

Unfortunately, the footage of the Top Tracer screen cut out before we discovered how far his ball went, but one thinks it would've been closer to the 400-yard mark than 300 yards.

At Top Tracer driving ranges, you can try the Long Drive game mode where you can register your longest drive compared with other players around the world.

I'd say that DeChambeau would have a great chance of finding the top of the leaderboard. Footage like this certainly whets our appetite for the eight-time PGA Tour winner's return to the fairways.

He has not played on tour since finishing seventh at the Tour Championship. He finished the season with wins at the Arnold Palmer Invitational and the US Open from September 2020.

We are likely to see him on the course next when he takes on Brooks Koepka in the fifth edition of The Match, which will take place on November 26 at The Wynn Golf Club in Las Vegas.