The Big Fijian helped Clarke achieve that natural tempo he is famous for with this piece of advice. 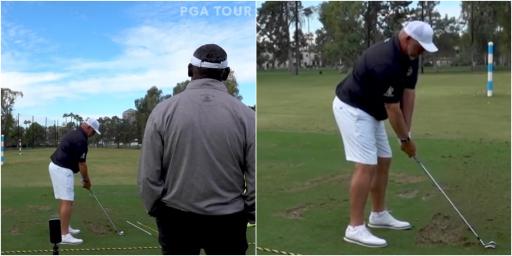 Vijay Singh was spotted giving out some range advice on the PGA Tour Champions last weekend to Darren Clarke.

The hall of famer was watching the former Open champion stripe some balls ahead of the Charles Schwab Cup Championship.

Phil Mickelson won the tournament to claim his fourth victory from six starts on the seniors' circuit since making his debut.

"You know what you can do Darren," the Big Fijian said. "I always do this for distance wise I have a check. I go like this."

Range tip from a Hall of Famer.

Singh, 58, demonstrates how he takes his address position with his right hand then uses his left hand to make a grip, starting from his thigh.

It marks the adequate distance you should be standing from the ball at set-up. If you're reaching, then you are too far away.

"Hall of fame tips," Clarke said before he puts the advice into action and smashes one down the practice range.

"There you go. That's freakin ripped," Singh said. "You see that rhythm there? That's the backswing and then a downswing."

Clarke has won three times on the PGA Tour in his career since he turned professional in 1990. He's won 14 times on the European Tour and most memorably won the Open Championship in 2011.

Even at the age of 53 with a storied career behind him, the Irishman is still keen to get some tips. And so should you.

He would deny this, but I can out-eat @DarrenClarke60 at an Indian restaurant. pic.twitter.com/3BFVAoKmiF

Clarke used the advice and put it to the test on the course.

The pair also get into a lively discussion about who would be able to eat more food.

"I know you'll struggle to believe it looking at me but I can eat," Clarke jokes.

MORE: ARE YOU ALLOWED TO USE AN IRON WITH NO GROOVES?

NEXT PAGE: MICKELSON FLOPS HIS WAY INTO OUR HEARTS