New details in bitten off finger: "sounded like chewing on a Dorito" 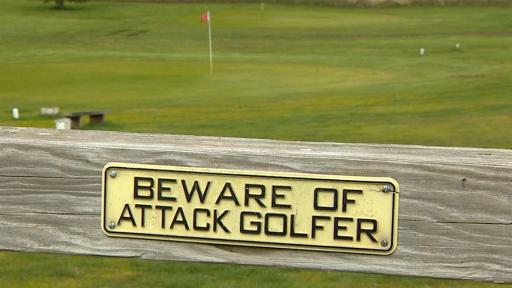 Derek Harkins, the man charge with biting off the finger of a fellow golfer during a foursomes brawl at Southers Marsh GC in Massachusetts appeared in court on Monday - and a number of interesting details have emerged.

Harkins, 46, faced charges of assault and battery, mayhem and disturbing the peace.

The incident occurred on Friday evening at the Plymouth golf course, where two foursomes were playing the 18th hole. Police revealed the altercation erupted over a dispute concerning pace of play.

The victim was 57-year old Daniel Menton, from Marshfield. Menton had one of his fingers bitten off to a knuckle, and although his son attempted to save the finger by placing it in a jar of ice and rushing to the hospital with his father, doctors were unable to re-attach the finger surgically.

According to court documents, Harkins claimed that he had been defending his father when the dispute broke out and that he had found the victim’s finger in his mouth which caused him to bite down.

Menton stated that the sound of his finger being bitten off was akin “to the sound made when someone chews on a Dorito.”

Harkins was released on a $10.000 bail and ordered to stay away from both alcohol and the victim.

On leaving the court, Harkins ignored questions from reporters waiting outside, making a quick exit. He appears back in court on Wednesday.