The next Phil Mickelson? Nope! WATCH a lefty have an ABSOLUTE MARE on the tee!

Left-handed golfer has a shocker on the tee... 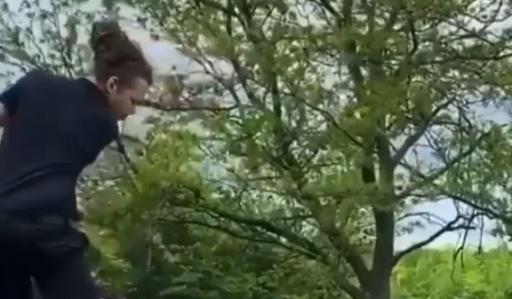 A video of a left-handed golfer has gone viral this week and it's fair to say he probably won't be making a career out on the PGA Tour anytime soon.

The lad in question already looked questionable from the start as he lined up to the ball with a man bun, fag in his mouth and ankle socks.

He stepped in with a very dodgy stance and then pulled the trigger. Well, multiple times.

The viral golf clip was posted by @hackpatrol on Instagram, and we could not agree more with the caption:

Here's how other golf fans reacted to the video:

"Not even Phil Mickelson could save this lad."

"I don't even know where to start on this video."

"Is that Carrot Top?"

"I don't understand why people don't start with the club on the ground. You're just gonna swing over it 9/10 times."

"Did anyone ever try telling him to look at the ball?"

"Just give up mate."

"He's clearly not a golfer."

"Proof that growing the game is just not worth it."

"The commentary. Clearly that's what he is missing."

"The man bun is the worst part."

"He is an embarrassment to lefties everywhere."

"Shoes are worse than the swing. Then the lung dart, then lefty."

"I'd just call it quits mate."