Tom Brady is an accomplished golfer and while filming with an FPV drone, it looks as though he made an amazing hole-out from the fairway. Or did he? 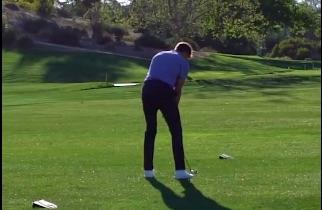 NFL legend Tom Brady was filmed playing golf using an FPV drone and he appeared to make an incredible hole-out in footage he posted on social media.

Brady took his shot from the centre of the fairway and as his ball travelled in the air, the First Person View (FPV) drone picked up the flight of the ball.

FPV drone racing is a sport where participants control drones with cameras while wearing head-mounted displays that show the live stream camera feed from the drones.

This allowed Brady, LA-based video director Ari Fararooy and the team from Shadow Lion to track the flight of the ball. The ball landed on the green and rattled into the cup.

This is why you film every shot on the course…

It is unclear as to whether the hole-out was real or not, but the 44-year-old and his team celebrated as if the shot was the real deal.

Brady made headlines on March 13 when he sensationally came back out of retirement, having just announced he was walking away from the sport 40 days earlier.

He has won seven Super Bowls and he has been the Super Bowl MVP on five occasions. His career began with the New England Patriots in 2000 and he stayed with them until 2019 when he moved to the Tampa Bay Buccaneers.

Brady is regarded as one of the best quarterbacks to have ever stepped on an American football field, but his other passion in life is golf.

On June 1, Brady and Aaron Rodgers of the Green Bay Packers will play against Josh Allen of the Buffalo Bills and Patrick Mahomes of the Kansas City Chiefs in the sixth edition of The Match.

Next Page: Tiger? Phil? here is everyone who has qualified for the 2022 US Open