OUTRAGE! Golf team forced to leave as STRIPPERS take over the course! 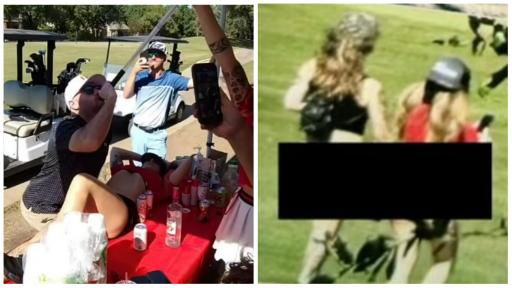 Vista Ridge High School's golf team was forced to cancel its practice session early on Monday afternoon after strippers strolled onto the golf course at Avery Ranch in Austin, Texas, according to FOX 7.

Each player then called their parents to come and collect them earlier than planned.

The school district was particularly shocked by what was going on at Avery Ranch GC because they have practiced there without any issues for two decades.

"Unfortunately, our golfers did witness some lewd behavior," a letter from the school district to the parents read, which was obtained by FOX 7.

"'The coach immediately cancelled practice and had all players contact their parents to come pick them up.

"What occurred yesterday is not acceptable and we will work closely with Avery Ranch to ensure this never happens again."

According to the FOX 7 report, the strippers arrived on the golf course to greet a gentlemen's club, Yellow Rose, from noon and the event is said to have finished at 5pm.

Taking a look at some of the photos that were shared on social media, two women were seen wearing crop tops and thongs out on the course.

It is understood that Avery Ranch GC were "not aware that these inappropriate actions would occur" during the tournament.

As a result, the golf club have confirmed they will not be allowing the gentlemen's club to return.

"We do not condone these actions," the club told FOX 7.

Vista Ridge High School's golf team is said to have returned for their practice session the following day, and thankfully there was not a crop top or thong in sight.

Next Page: Thomas Bjorn left FUMING as someone changes his driver settings without him knowing!