Paige Spiranac reveals why she chose THIS NEW DRIVER...

Paige Spiranac compared the Titleist TSi3 and TaylorMade Stealth drivers, explaining how and why she made her final decision. 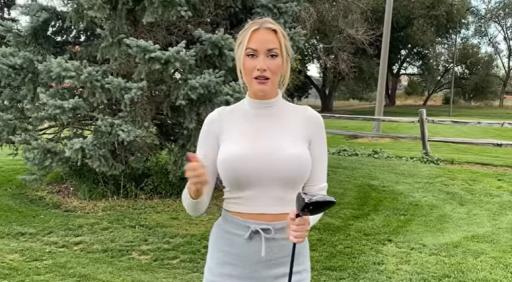 Former professional golfer and popular social influencer Paige Spiranac compared two of the best golf drivers in the game in her most recent YouTube post.

Spiranac took the Titleist TSi3 and the TaylorMade Stealth drivers and compared their qualities, going into depth on their features and how they benefitted her game.

The 29-year-old, who was recently included in a staggering report conducted by Picks Wise, emphasised the importance of custom fitting, as we do in each of our golf club reviews, and how the clubs should fit your swing, instead of you changing your swing to suit the club.

The TaylorMade Stealth driver has a face made of 60 layers of carbon which is a unique feature and selling point. Carbon is far lighter than titanium and this is meant to produce a more efficient energy transfer.

As for the Titleist TSi3 driver, it is meant for players who want more consistent contact and control over CG placement. It features new SureFit CG Track Technology that provides five CG positions to help your performance.

It is made with ATI 425 Aerospace Titanium and Paige favoured this club over the TaylorMade driver. Although she hit it further with the Stealth, she found better consistency, workability and performance under pressure with the Titleist TSi3 driver.

Released in 2020, the likes of US Open champion Matt Fitzpatrick and five-time DP World Tour winner Tommy Fleetwood put this in the bag, showing how impressive and popular this club is.

As well as considering the qualities of each club, the Titleist TSi3 driver can be found at £399.00 online as the older club, whereas the TaylorMade Stealth is largely available at £469.00.