Calling all golf lovers - time to back #TheGreatBritishOpenChallenge 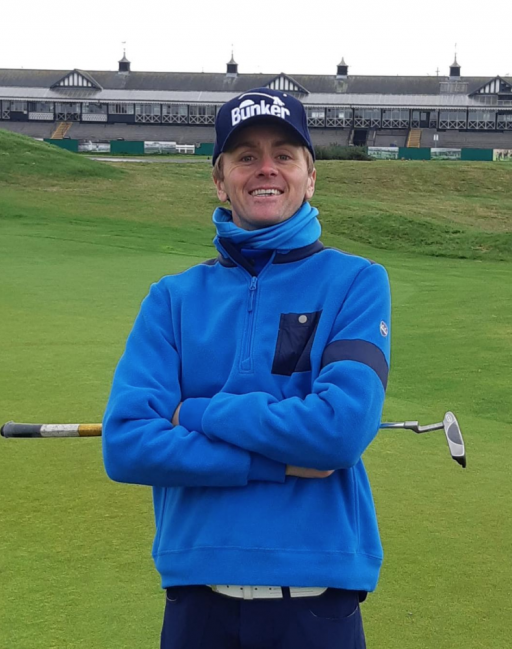 After more than 250 miles cycling on the road and seven Open Championship courses played in just over three days, ‘The Iron Golfer’ is forging ahead on the #TheGreatBritishOpenChallenge.

Committed PGA Pro Luke Willett now needs the backing of golf-lovers everywhere who understand the benefits of supporting the next generation of young players and helping national charity the Golf Foundation through this unique fundraising effort.

As Luke cycled onto the ferry late this afternoon at Stranraer (Monday 21st) for Northern Ireland to play Royal Portrush, he left Scotland after playing seven of the 14 Open Championship venues as part of his 10-day, 830-mile cycling #TheGreatBritishOpenChallenge to raise funds for the Golf Foundation – putting his body on the line to support this charity that changes the lives of young people by introducing them to golf.

After striking his opening tee shot just after dawn at Carnoustie Golf Links on Friday, Luke cycled to St Andrews and with just his four golf clubs (wood, long iron, wedge and putter) shot 73 on the Old Course before enduring a “nightmarish” 60 miles of cycling in torrential rain, flooded roads and heavy traffic to Edinburgh.

"Each time a car flew past me it was like having a bathtub of cold water thrown over me!” said Willett.

Arriving at midnight, Luke poured water out of his shoes before getting up again at 5.30am to ride to play Muirfield and Royal Musselburgh on Saturday. Finally, better weather reached him on Sunday as he played Royal Troon and Prestwick before completing his Scottish odyssey today in sunshine at Trump Turnberry.

After Royal Portrush on Tuesday it will be over to England to play the six English Open venues finishing at Royal St George’s on Sunday October 27th.

"I have never experienced anything like the conditions I did on Friday night; it was incredibly difficult and a huge mental challenge after two full rounds of golf in the cold and wet," said Willett.

"The cycling has been very tough but the pleasure of playing these wonderful Open Championship courses has been immense; this is the golf of dreams for any player. The reception from the golf clubs, their staffs, the Scottish golfers and non golfers has been really staggering and humbling.

"I feel everyone has been right behind me and they all understand the idea of inspiring a new generation of young players by showing that life is an adventure, just as golf is.

"Golf isn’t all about the number on the scorecard and that’s why I wanted to team up with the Golf Foundation and raise funds for them in this way."

All funds raised by #TheGreatBritishOpenChallenge will go directly to helping more young people from all backgrounds to Start, Learn and Stay in the sport.

The Golf Foundation reaches 500,000 boys and girls each year, creating a player pathway from school sport to the golf club environment and regular coaching with PGA professionals.

The charity wants to encourage young people to keep playing and keep developing the skills for life that the game teaches them.

Vanessa Bell, Head of Fundraising for the charity, said: "The whole Golf Foundation team has been hugely impressed with Luke’s spirit, energy, sense of humour and courage on this amazing journey.

"Our team works all year round to make a genuine difference to a great many young people through golf.

"We are a charity and hope Luke’s adventure can now inspire golf-lovers up and down the UK to put something back into the game for the next generation.

"We will be hugely grateful for any donations large or small in the days ahead; donating the equivalent of the price of a golf ball would be a brilliant gesture in itself."

If you would like to support Luke today, simply go to Luke’s JustGiving page at https://bit.ly/2lFLQbS

Previous
We asked 500 golfers how often they clean their golf clubs...
Next
How much every player won at the CJ Cup