Pro golfer makes an ALBATROSS to get into playoff, then takes down the win

Louis Oosthuizen famously made an albatross at the Masters and no doubt he would have been proud of this effort. 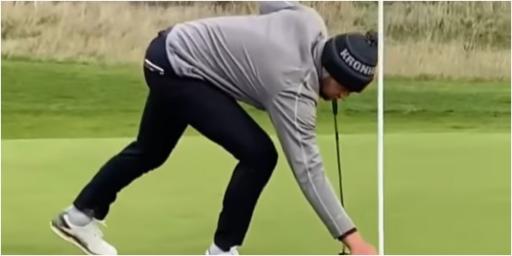 If you're ever going to make an albatross in a professional event then this was the time to do it.

It is unlikely you have ever heard of this player but his name is Christopher Feldborg Nielsen.

The 29-year-old plays out of the Nordic Golf League where those who do well can progress onto the Challenge Tour and then the European Tour.

Nielsen has played a number of Challenge Tour events and even has one European Tour start to his credit.

And he delivered perhaps one of the most dramatic finishes you could ever imagine last week on the Road to Europe Tour Final at the Ledreborg Palace Golf Club in Denmark.

At 1-over par for the tournament he pegged up his ball on the par-5 18th needing somewhat of a miracle.

He had already made six birdies on his round but he dropped two shots at 15 and it looked all but over.

He sent his tee shout into the thick rough on the last and still attempted to get a wood onto the back of the ball to go for the green.

And he did just that, holing out for an albatross two.

It's shame the moment wasn't captured on video.

The tour's official Facebook page captured the moment he walked up and grabbed the ball out of the cup.

But they did not say what club he used or how far he had into the green.

Sweden's Adam Blomme had to make birdie to force a playoff. He did.

Then Nielsen found the green again in two and made birdie as Blomme made a par.

It was Nielsen's third win of the season and earns him a promotion to the Challenge Tour for 2022.

That close to an Albatross.

NEXT PAGE: FANS REACT TO "DAD OF THE YEAR" GOLFER ON INSTAGRAM