Lefty had an interesting weekend on the PGA Tour Champions when he signed for two quadruple bogeys...but then responded with this. 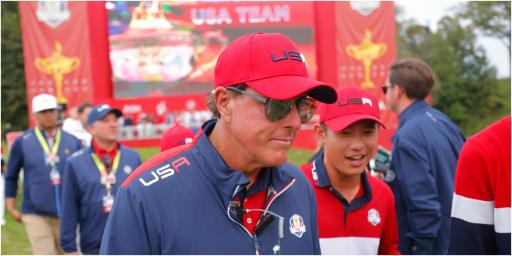 Phil Mickelson is an entertainer and he will continue to thrill and dazzle until the day he finally has to call it quits.

Lefty had an interesting weekend on the PGA Tour Champions when he signed for some rather high scores.

Two quadruple bogey nines even had the commentators ribbing Mickelson about his desire to continue to keep hitting driver.

Mickelson, 51, defended his choice to keep hitting the big stick by insisting in the long run he is "going to win that fight".

He would have a wedge or a nine iron in his hands compared to his opponents hitting a five or a six-iron.

Mickelson couldn't win his fourth win on the champions' circuit in his fifth start and ended up tying for 47th.

Yet Mickelson has never been one to take the criticism and lie down and already appears to have dusted himself down.

The next day Mickelson was in Virginia for an event with his sponsor KPMG (he likes their hats) to play a few holes with their employees.

And Lefty delivered in the only way he knows how - and gave one group something they will tell their friends and family for life.

Take a look at the video below he posted on his Twitter:

Flew to Houston for @KPMGGolf event and this just happened. Couple of 9’s this weekend and a “one” today
Whatever pic.twitter.com/Ae6yHNtnT6

NEXT PAGE: COLLIN MORIKAWA UP TO CAREER HIGH SECOND