'Dad of the year': Golf fans react on Instagram as player pushes pram on course

This man was pictured on the fairways pushing a stroller...and this is how the Internet reacted. 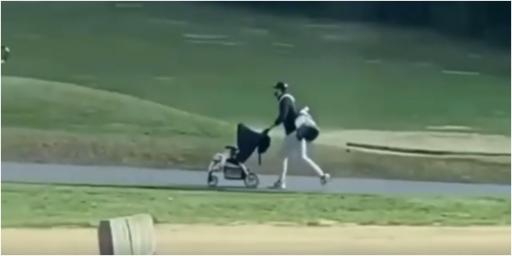 This man appears to have absolutely no excuses when it comes to playing some golf.

Combining parenting with the greatest game on earth must be very testing with your patience.

Probably hitting a fat, thin or a chunk and then making sure your little boy or girl isn't making a fuss must be hard.

What about those other snooty players who need absolute silence before they invariably hit another bang average shot?

But not for this person who was spotted pushing a stroller in the glorious sunshine.

Take a look at the video below, which surfaced on Instagram and now users are tagging their mates telling them: "Dad of the year".

Not a care in the world.

It appears that the idea has caught on:

And some of the comments were downright hilarious.

"Slowest group in the world"

"Dad of the year"

RELATED: HOW WOULD YOU PLAY THIS TIGER WOODS BUNKER SHOT?!