This pro golfer had an absolutely nightmare start to his week before PGA Tour Canada Q School. 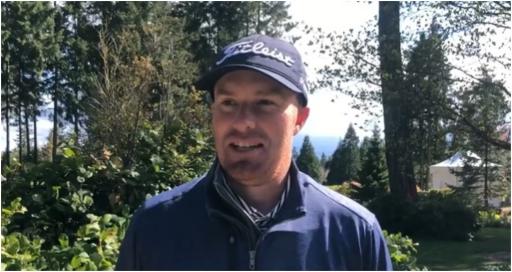 When it comes to airlines being completely hopeless and losing golf clubs it is absolutely nothing new.

But professional golfer Rob Hudson has had a nightmare that might even top your worst experience.

The airline lost his clubs and inside that luggage contained his contact lenses. What a fantastic start to the week.

It's bad enough losing the tools of your craft. But not being able to see properly is the icing on the cake in a particularly crucial week.

Hudson was due to play PGA Tour Canada Q School at Crown Isle Resort and it looked like he was going to have to withdraw.

But the staff were able to sort him out some clubs as he played the first round without his contact lenses.

"Without their [the pro shop's help] I was not going to be able to play," he said.  "They gave me a set of clubs. Gave me a putter out of the pro shop, gave me some wedges.

"It's not a perfect fit but I'm kind of making it work. I feel like I have got nothing to lose now. I still don't know where my bags are.

"I have spent so much time on the phone trying to find them. I'm just grateful that I have a set of clubs I guess."

After the airline lost his luggage and clubs, Robert Hudson was walking to the tee this morning ready to play blind.

A local optometrist dropped off new contacts just in time and he went on to shoot a 67 and is T6…with a borrowed set of clubs pic.twitter.com/cH5k8dy9xZ

Hudson shot an opening round of even-par round of 72 on Tuesday afternoon. Then he got a delivery of new lenses from the local optometrist before his second round.

There, he managed to cultivate a bogey-free round of 67 to leapfrog into the top-10 in a tie for sixth place.

Nine tour cards are awarded in the four round event so Hudson will have to keep it going.

We are sure that everyone will wish him the very best of luck as he heads into his final two rounds.