"Everything can be rectified" Jon Rahm defends exiled Phil Mickelson

Jon Rahm has spoken about what Phil Mickelson needs to do before he returns to the golf world. 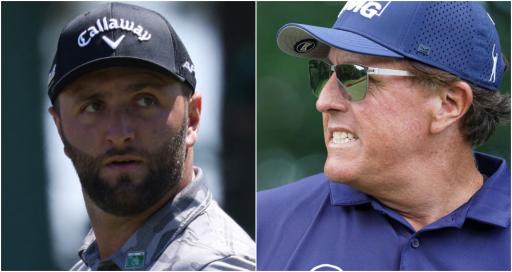 We're not sure when we are going to see Phil Mickelson again but it appears he has one guy prepared to forgive his remarks: Jon Rahm.

Mickelson remains in exile after a dramatic fall from grace but a statement from his agent earlier in the week has us believing that Lefty may be nearing a return.

One question that remains is how exactly will he be received when returns to the golf world? My view is that his remarks were unflatteringly amoral but not unforgivable.

There will be a route back. Americans love a comeback story. If Tiger Woods can get himself back in the good books after many misdemeanours then so can Mickelson.

Former World No.1 Rahm is playing the Mexico Open this week, his first tournament since a underwhelming Masters.

Rahm told Golf Channel of Mickelson: "That guy has given his life to golf.

"A lot of people focus on Tiger, but [Mickelson] is easily one of the top 10 best players of all time.

"He is a Hall of Famer, and we should recognize him as that. He has given his life to the public.

"No one has signed more autographs, no one has done more for the fans.

"I know he's in a bit of a slump for whatever it may be. I don't think his whole career or whole legacy should change because of a couple comments."

He added: "Everyone makes mistakes and everything can be rectified. I believe that can happen, but it has to come from him as well."

Mickelson's agent, Steve Loy, confirmed earlier in the week that Lefty had applied to the PGA Tour for permission to play in the first Saudi-backed event at Centurion.

It's also been confirmed Mickelson has registed for the U.S. Open and PGA Championship.

It's interesting to note that Loy also represents Rahm. The Spaniard has spoken before about how Mickelson was a mentor to him when he first arrived on Tour.

How Mickelson will be received by his other players will be interesting.