The new Seve exhibition will run for 18 months, including throughout the 150th Open in St Andrews. 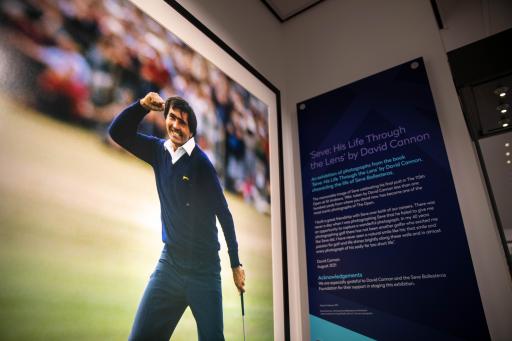 Seve Ballesteros is one of the game's most iconic figures.

The world of golf was in mourning when he died at the age of 54 in 2011 after he was diagnosed with a brain tumour two years prior.

And to celebrate his life and career, the R&A World Golf Museum will launch an exhibition and film.

The exhibition will include a selection of images from sports photographer David Cannon, whose portfolio of work on Seve's colourful career has been published in his new book entitled: Seve - His Life Through the Lens.

That book features one of his most famous shots and his iconic celebration after holing the putt on the 18th hole at the Old Course in St Andrews to win The Open in 1984.

Cannon said: "I built a great relationship with Seve over both our careers. There was never a day when I was photographing Seve that he failed to give me an opportunity to capture a wonderful photograph.

"In my 40 years photographing golf there has not been another golfer who excited me like Seve did. I have never seen a natural smile like his, that smile and passion for golf and life shines brightly along the walls of the exhibition in almost every photograph of his sadly far too short life."

The R&A premiered documentary on Seve's life on Wednesday, 29 September in St Andrews. The film follows Seve's journey from his humble beginnings in Spain to becoming one of golf's most decorated players.