R&A chief counters any argument that Patrick Reed should be banned...

Martin Slumbers: "I think the young players today are on the whole great ambassadors for our sport." 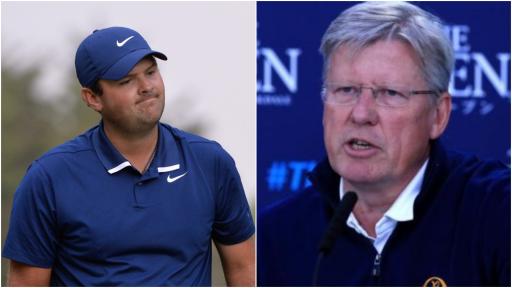 R&A chief executive Martin Slumbers leaped to the defence of Patrick Reed when quizzed over the American not receiving a ban for his indiscretion during the Hero World Challenge in December.

Slumbers was speaking to members of the UK media about a number of issues in the golf world right now, one of which was confirming Royal Troon is set to host its 10th Open Championship in 2023.

But it was his answer to the question of whether or not he thought Reed should have received a ban for his controversial two-stroke penalty when improving his lie in the waste bunker in the Bahamas that was most interesting.

"Many people think he should have been [banned]," said the questioner, to which Slumbers immediately replied "and there's a lot of people who don't think that."

Slumbers continued: "I think you underestimate how much goes on behind closed doors with players, with referees, and the senior leaders of the game in assessing what actually happened.

"We live in a world now where everything is seen and everything is talked about. Did the great players of 30 years ago lose their temper on the golf course? I’m sure they did. It just wasn’t reported upon.

"I think the young players today are on the whole great ambassadors for our sport—and they’re great company to be around. Certain things should be behind closed doors and private."

NEXT PAGE: ROYAL TROON TO HOST THE 2023 OPEN CHAMPIONSHIP