REVEALED: 10 basic golf rules the beginner needs to know in 2021

A bitesize guide to 10 very important rules in golf... 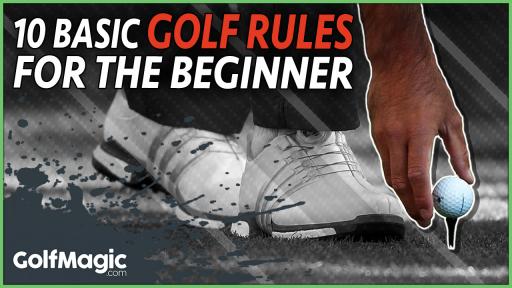 The Rules of Golf are often considered too detailed and stringent as to put potential committed golfers off in the early stages of discovering the game, but thankfully they have been condensed slightly in recent years.

Friends and family can ease the transition but others worry those not knowing the Rules can be deterred from getting started. However, core Rules are not difficult to grasp, and with this helpful introduction even newcomers will soon be advising their playing partners that it is actually ‘the nearest’ and not necessarily ‘the nicest’ point from which to take relief for an obstacle!

1. Clubs in your bag

You’re allowed to carry up to 14 (that’s FOURTEEN!) clubs in your bag during a competitive round. You may carry less but make sure you check the contents before you start and discard any additional ones - it can cost you penalty strokes for every hole you play - CLICK HERE for the official rule on player equipment in the R&A's Rules of Golf.

The 2001 Open Championship final round overnight leader Ian Woosnam can tell you all about this rule after being deducted two strokes for having one club too many in his bag! Do not commit the same mistake!

2. Play within the parameters of the tee

The first tee shot of a round is always daunting, even for seasoned golfers, so make sure you tee up between and behind the front of the appropriate markers - usually white for medal tees, yellow for men, red for ladies - and within two club lengths.

With all the swing thoughts that go through the average player’s head, it can be easy to forget about these basic parameters. There is a two-stroke penalty for teeing up the ball outside of them (you may take your stance outside if you prefer) in strokeplay

CLICK HERE to learn more about Rule 6 in the Rules of Golf.

Sounds blindingly obvious but unless you mark your ball before you start, there’s a danger - with so many golf balls similarly stamped - you may mistake yours for another player’s ball.

Playing the wrong golf ball in matchplay could mean loss of hole in singles and will be a two-stroke penalty in strokeplay. To avoid such a penalty, then get marking your ball more clearly with distinctive personalised symbols.

But if you’re unsure the ball - in the rough, for example - is yours, notify your playing partners, mark it carefully with a tee peg, lift but do not clean it (only to identify it) and replace in the identical spot you’re within your rights.

CLICK HERE to learn more about this specific rule under Rule 6.3.

Once you have reached the green, there are a couple of key Rules of which you need to be aware. Once the ball comes to rest on the putting surface you may mark it with a coin, or disk, lift and clean it but remember to replace in the exact spot.

Golfers are now allowed to repair almost any damage on the green, such as spike marks, ball-marks, indentations from a club or flagstick, and animal damage.

However, golfers are not permitted to repair aeration holes, natural surface imperfections, or natural wear of the hole.

5. Play your ball as it lies

Always play your ball as it lies, wherever it comes to rest, unless the Rules allow you to do otherwise.

If the player’s ball comes to rest and is then moved by natural forces such as wind or water, the player normally must play it from its new spot. If a ball at rest is lifted or moved by anyone or any outside influence before the stroke is made, the ball must be replaced on its original spot.

Players should take care when near any ball at rest, and a player who causes his or her own ball or an opponent’s ball to move will normally get a penalty (except on the putting green).

If your ball has come to rest in a position that you believe to be unplayable, you have three options.

A player may take unplayable ball relief using one of the three options in Rule 19.2a, b or c, in each case adding one penalty stroke.

CLICK HERE for Rule 19, which covers the entirety of this ruling.

Knowing what to do when your ball sails out of bounds is crucial to a beginner. A ball hit beyond the confines of the course (usually marked by white stakes) must be re-played from the original position adding a penalty of one stroke.

The scorecard of any course should have its boundaries clearly marked or described.

If you believe a shot has gone OB or into a water hazard always play a provisional and declare it.

You now have three minutes (it used to be five minutes) to search for it and if indeed it is lost you saved valuable time continuing with the provisional ball despite a one stroke penalty.

If your original is subsequently found in bounds or dry within three minutes of the point of search you must continue with the original ball.

CLICK HERE to learn more about Rule 18 in the Rules of Golf.

While it is one of the most sociable of sports, golf is a solitary game and this is reflected within the Rules.

You cannot ask advice on club selection for example from anyone other than your team mate (if you are playing fourball or foursomes for example) or a caddie.

Neither should you offer advice to opponents in competition. However, you may ask for information on the Rules, distances or positions of hazards or the flagstick.

CLICK HERE to learn more about this specific rule where advice is concerned on a golf course.

Striking the ball would seem like a matter of technique but it is also governed in part by the Rules.

For instance, if you find yourself in a difficult lie with an awkward stance, you must strike the ball with the head of the club.

You cannot spoon, scrape or flick it in a style that cannot be described as a ‘stroke’. A two-shot penalty in strokeplay and loss of hole in singles matchplay will be the outcome.

CLICK HERE to learn more about the definition of a "strike" when it comes to a golf shot.

At the end of a strokeplay round, you must make sure your card has been completed correctly - achieved by comparing scores you have marked on a playing partner’s card (you will have exchanged cards at the start of the round) with those he or she has recorded.

Once you agree, the card must be signed by both parties as a correct record of each hole. Incorrect scorecards and unsigned ones will lead to disqualification.

At the 2000 Benson and Hedges International Open Padraig Harrington was disqualified from the competition just five minutes before teeing off on the final round with a five-shot lead for signing his scorecard incorrectly. Even the professionals can do it!

CLICK HERE to learn more about Rule 3 when it comes to scoring on a golf course.

What do you make of our list - have we missed any? Which golf rules need improving or amending? Share your thoughts on our social media channels, or come and join us on YouTube.