50 years ago astronaut Alan Shepard hit a golf ball on the moon which he claimed travelled "miles and miles", but now we know just how far it really went. 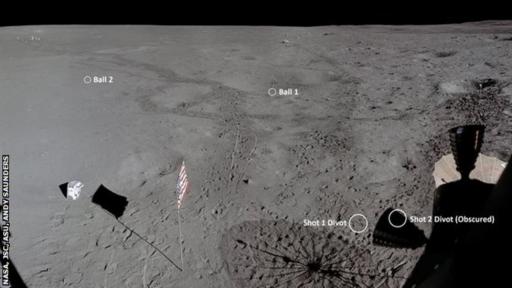 An imaging specialist has been able to calculate how far astronaut Alan Shepard really hit a golf ball on the moon during the Apollo 14 mission 50 years ago.

Shepard admitted that his first attempt went terribly wrong and he shanked it into a crater, but the commander of Nasa's Apollo 14 mission claimed that his second ball travelled for "miles and miles and miles".

Andy Saunders, an imaging specialist, has digitally enhanced recent high-resolution scans of the original footage of the mission and applied a stacking technique on smaller 16mm 'movie' footage shot by the crew, which has enabled him to locate the second ball and calculate just how far it really went.

"We can now fairly accurately determine that ball number one travelled 24 yards, and ball number two travelled 40 yards," said Saunders, who has been working with the USGA to celebrate the anniversary of the mission.

"Unfortunately, even the impressive second shot could hardly be described as 'miles and miles and miles', but of course this has only ever been regarded as a light-hearted exaggeration."

The ball may not have travelled "miles" as Shepard once claimed, but Saunders believes the actual distance is still very impressive, given the difficulty of swinging a makeshift golf club wearing a spacesuit.

"The pressurised suits severely restricted movement, and due to their helmet's visors they struggled to even see their feet.

"I would challenge any club golfer to go to their local course and try to hit a six-iron, one-handed, with a one-quarter swing out of an unraked bunker.

"Then imagine being fully suited, helmeted and wearing thick gloves. Remember also that there was little gravity to pull the clubhead down toward the ball.

"The fact that Shepard even made contact and got the ball airborne is extremely impressive."