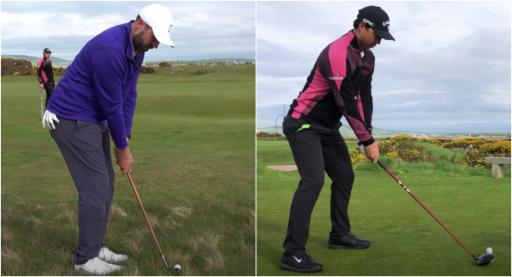 YouTube golfer Rick Shiels took on arguably his toughest challenge yet when teeing it up with European Tour player Min Woo Lee at St. Andrews.

The pair took on the Old Course in a foursomes format. Lee was allowed to use his regular full bag of Callaway clubs, but Shiels had to use a full bag of hickory clubs.

For those who are less familiar with hickory clubs, they are authentic clubs that were used back when golf was played in the era of Tom Morris in the 19th century.

They are extremely hard to hit with their wooden shafts and small metal faces. Also, not only were the pair dealing with this twist, but they also played the Old Course from back to front in a clockwise direction.

For example, they played from the 1st tee box to the 17th green and then from the 18th tee box to the 16th green. As peculiar as this sounds, this was how the Old Course was played when golf first surfaced as a sport.

Shiels was invited to the historic venue to take on the challenge by Callaway, who have an association with the St. Andrews Links Trust.

As you can imagine, Rick struggled to find consistency with the hickory clubs and it is fair to say, a player of any golfing ability would find it difficult to hit consistently good shots with such clubs.

Lee, who won the ISPS Handa Vic Open in 2020, set the impressive pair a target of 80 before they walked on to the first tee, and you can find out what score they managed to shoot by watching the video above.