Horsfield lands maiden European Tour title, as Sjoholm produces one of the funniest moments of the season to date... 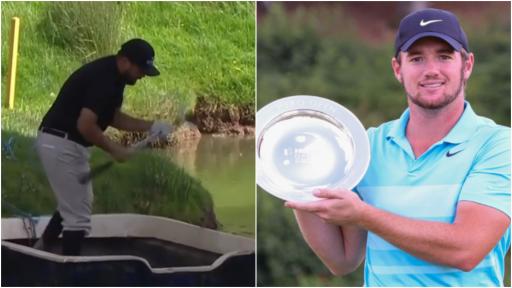 Sam Horsfield clinched his maiden European Tour title with a narrow one-stroke victory at the Hero Open at Forest of Arden.

Horsfield hit a stunning fairway wood to the back fringe at the par-5 17th and two-putted to move one stroke clear, just moments after Thomas Detry had missed from three feet at the par-3 18th to hand the initiative to Horsfield.

The Orlando-based Englishman once mentored by Ian Poulter when he was 13 years old then sent his tee shot into the heart of the green at the final hole, and duly two-putted for the victory.

"It's special," said Horsfield, who won the European Tour qualifying school by eight shots in 2017.

"With everything that's going on in the world right now I'm thankful that the European Tour has been able to put on tournaments for us to play. I've been in Orlando for the last three months and I felt like my game was right there.

"I played decently last week [in the British Masters], had a pretty bad finish, but I kept the positives from that and played pretty solid all week."

The biggest laughs of the final day were produced by Sweden's Joel Sjoholm, who had to jump in a little boat to play his ball from an island on the 17th hole...

Sjoholm would go on to make a bogey-six and finish up in a tie for 22nd place on 9-under par.