Golf chiefs at the heart of the proposed Saudi Golf League have prized away a top legal force from the FA, signalling some spicy legal battles. 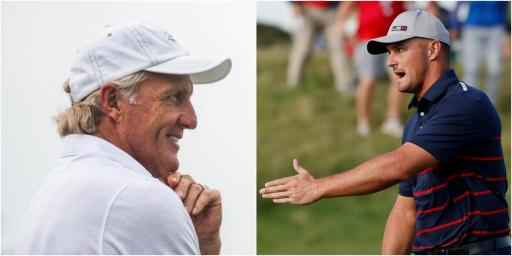 Golf chiefs at the helm of Saudi Arabia's proposed breakaway league have poached one of the Football Association's top lawyers, The Times have reported.

The paper have reported that Polly Handford has been prized away from her work within as the head of legal and governence at the FA.

Essentially, this signals the anticipation of huge legal battles going forward as the world's leading golfers have reportedly been offered vast sums to ditch their allegiances and sign up to a rival league.

That would happen under a radical expansion of the Asian Tour which is backed by Saudi Arabai's public investment fund. It is the same source of money that purchased the football club Newcastle United in the Premier League.

Bryson DeChambeau has been touted as the poster boy for such a venture, though he denies being offered the alleged sum of $135million to up sticks.

The Times have reported that Handford will now work alongside Greg Norman, who is the chief executive of LIV Golf Investments.

LIV Golf Investments is the company that has been set up to push through the new competition, which Norman insists is for the "betterment" of the game.

The PGA Tour and DP World Tour have signed a strategic alliance with each other and have threatened to ban any player who signs up to the new concept.

Yet these issues could be heard within a court room at some point, judging by the appointment of Handford. Whether it is legal for the PGA Tour to ban players is another issue yet to be explored. The tour's commissioner, Jay Monahan, is resolute in his stance.

Phil Mickelson is largely seen as the most vocal critic of the PGA Tour lately, questioning their greed and claimed it was "beyond obnoxious".

Elsewhere, he confirmed that all of the world's top 100 golfers have been approached about potentially joining.

Lee Westwood has said he has signed a NDA about the proposed league. He previously described it as a "no brainer" if he was offered tens of millions of dollars to play golf when he is nearly 50 years old.

Handford, the paper have reported, is married to the Sussex cricket chief executive Rob Andrew and is considered a "leading force in British sporting legal circles".

She worked in that current role for more than five years and has previously wrote on the FA's website that her central role at the governing body was to "fight to eradicate all forms of discrimination from our game".

The paper claim that she has been offered a significant pay rise to join Norman and his cronies.

One thing is for sure out of all of this: the power struggle will invariably continue for many months and perhaps years.

The Premier Golf League (separate to Norman's idea) is still something that has not gone away. It has been suggested they want a league comprising of 48 players and are said to be willng to give 50 per cent of the ownership back to PGA Tour members.

That concept would see 12 events staged per year with a team element, with weekly purses hitting a staggering $20million and $4million to the winner.