Eventual winner Mirim Lee uses the temporary fencing as a BACKSTOP on her second shot, then holes the chip! 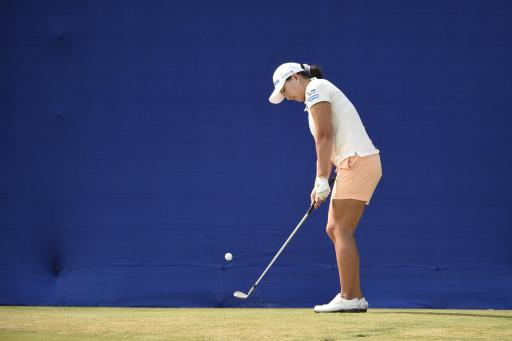 It will likely go down as one of the most ridiculous final holes in major championship history. A temporary fencing behind the 18th green that eventual ANA Inspiration winner Mirim Lee claimed she used as a "backboard" to victory at Dinah Shore.

The blue fencing, now nicknamed the "Great Wall of Dinah", was constructed in front of the water behind the green to loosely replicate what players would see when the tournament was played with fans.

Mirim Lee chips in for eagle on the 18th to take a share of the lead at 15-under‼️@GolfChannel | @ANAinspiration pic.twitter.com/Lss2cPNOBK

Why yes, this wall behind the 18th green *is* going to play a role. Mirim Lee's approach was coming in hot but bounced off the wall. She got relief and then chipped in for eagle to tie the lead. pic.twitter.com/cGKSb9MAyX

As a result of the temporary fencing, a number of players were sending their second shots into the backboard to set up a simple chip shot down the green for a birdie.

Lee, who went on to oust Brooke Henderson and Nelly Korda with a birdie on the first extra hole, admitted to using the backstop on the 72nd hole as he trailed by two strokes.

The South Korean deliberately sent her second shot into the fencing, then took her drop before holing out her eagle chip to send her into a playoff.

"I definitely thought to utilise the backboard," said Lee, who incredibly chipped in three times on Sunday.

How about this belly flop from Mirim Lee’s caddie? pic.twitter.com/O0TZeaCICq

"My plan for 18 was just to have a birdie and do what I have to do to keep my head up, and when the shot went in, I think I was really surprised. It must have been a bit of luck that helped me."

Social media was up in arms at seeing the fencing giving players a distinct advantage, with Bunkered's digital editor Michael McEwan posting one of our favourite tweets of the entire year with a tongue-in-cheek post referring to Augusta National's iconic par-3 12th hole.

Can you imagine if THIS actually happened at The Masters?! Lee Westwood replied: "I'm not sure that would help!"