This teenager now wants to help others after she reacted quickly when her father collapsed when repairing a pitch mark. 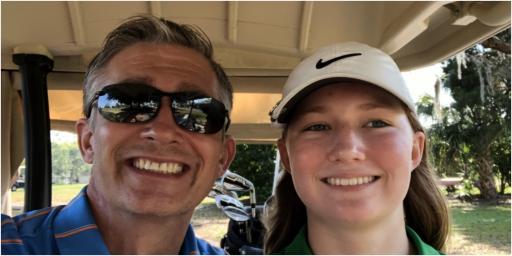 A teenager saved her father's life on the golf course after he collapsed when repairing a pitch mark, GolfDigest have reported.

Kaitlin Ryan, 15, performed CPR on her father Steve Ryan when she noticed he had collapsed and was lying face down in April.

The Palm Harbor University High School student had learned how to perform the emergency procedure at school and sprung into action.

She attended to her 49-year-old father before the emergency services turned up on 19 April 2020 at the course's practice area.

"I got up and knew something was wrong," she told GolfDigest as she was practicing shots from 100 yards.

He had just bent over and was repairing pitch marks when he fell to the ground.

The publication reported that she checked for a pulse, rang her mother and dialed 911.

"I never ever expected to have to use CPR, but I'm just so thankful that I had basic education to give me enough confidence to do it for my dad under pressure," she told the publication.

They reported that her father spent three days in hospital in a medically induced coma and was woken up from it on his daughter's birthday and told how his life was saved.

Doctor Tom Prichard, who provided medical assistance to a fan during Newcastle's match vs Tottenham, discusses the incident after it was confirmed he is "stable and responsive" in hospital. pic.twitter.com/0aUCBIsPHR

The publication have reported that he has not had any serious effects after the incident and hasn't been able to play that much golf.

Now his daughter wants to help raise awareness for others based on her life-changing experience.

She organized a tournament called The Chip in for Sudden Cardiac Arrest which took place in June at the Innisbrook Resort in Florida.

They raised money for the American Heart Association and Sudden Cardiac Arrest Foundation.

GolfDigest report that Kaitlin is an aspiring biochemistry/pre-medicine student and is getting ready for college.

They quoted her father as saying he still thinks he can beat her inside 50 yards.

RELATED: TIPS, ODDS AND PREDICTIONS FOR THE ZOZO CHAMPIONSHIP

RELATED: HOW MUCH MONEY DID RORY MCILROY WIN AT THE CJ CUP?