Tiger Woods at Firestone: money earned per shot, per hole, per round

Tiger Woods looks to break his five-year drought for a win at one of his favourite Tour stops. 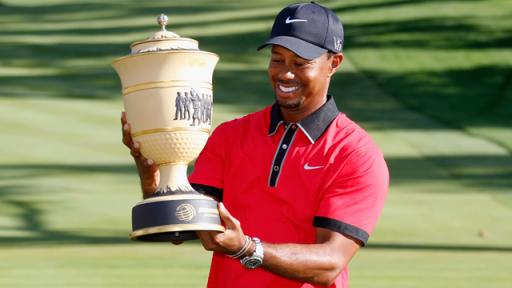 Tiger Woods will bid to break his five-year winless drought on the PGA Tour at the scene of his last victory back in 2013 at this week's WGC-Bridgestone Invitational at Firestone.

RELATED: 5 REASONS TIGER HAS NO CHANCE AT THE WGC-BRIDGESTONE THIS WEEK!

The 79-time PGA Tour winner enters this week off the back of two solid results with a tie for fourth at the Quicken Loans National and tied sixth at The Open, where he led with eight holes to play at Carnoustie.

Breaking down Woods' numbers at Firestone, and it's easy to see why the bookies have slashed Tiger's odds into as low as they've been at the start of a tournament for many a season at 12/1.

Woods, who tied Jose Maria Olazabal's course-record 61 of 1990 in the second round in 2000 and again in 2013, has made what Luke Donald describes as "enough money for a solid career" in Akron, Ohio.

Woods is up to 50th in the world rankings and a win this week would vault him up to as high as 20th. A 10th place would likely push him up to 40th.

NEXT PAGE: THE MOST OUTRAGEOUS TIGER WOODS OUTFIT YOU'VE EVER SEEN!