Andrew Coltart didn't take his singles loss in 1999 very well, so Tiger Woods gave him a little gift in Paris. 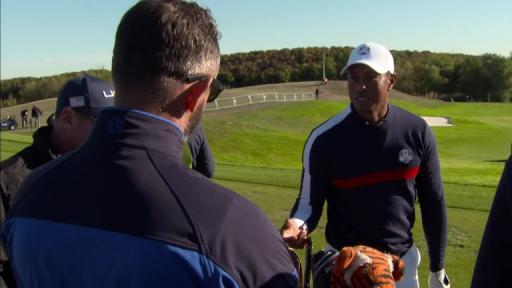 Tiger Woods has endured his fair share of pranks from his US team-mates at the Ryder Cup this week, but he was playing one of his own on a former European Ryder Cup player in Andrew Coltart today.

Woods took down Coltart in their 1999 Ryder Cup singles clash by a 3&2 scoreline, but the match was marred somewhat by the Scot's claim his ball was stood on by a camerman on the 16th hole. He also criticised the behaviour of some of the American fans during their match.

Coltart, who now works as a commentator for Sky Sports Golf, went over to congratulate Woods on his Tour Championship victory last week alongside co-commentator and former US PGA champion Rich Beem.

WATCH HERE as Woods presents Coltart a gift to remember the match - a pair of belts with a special message!

Woods was pranked by his team-mates on Sunday night upon his return from the Tour Championship, and again on Thursday when Justin Thomas made fun of his receding hairline.