Is THIS the luckiest shot ever hit at a Ryder Cup? 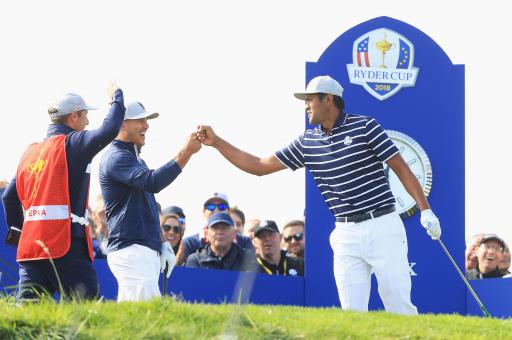 Tony Finau and Brooks Koepka may have gone on to defeat Justin Rose and Jon Rahm to put an early red point on the board for the Americans on Friday morning at Le Golf National, but it was THIS shot that turned the entire match on its head.

Playing first but 1 down to the Europeans, Finau came up well short with his tee shot to the par-3 16th. However, his ball struck against the bulkhead and caromed to within three feet of the pin for a birdie to bring the match back to All Square. Had that ball gone in the water then Europe would have at worst maintained their lead with two holes remaining.

Watch the video below...

Finau and Koepka then took advantage of Rose and Rahm making bogey at the 18th to record a par and see out a 1 up victory.

It wasn't the only piece of drama in the match as Koepka crashed his tee shot into a lady spectator on the sixth, leaving her bloodied. Full report here.

The Americans take a 3-1 lead into the Friday afternoon foursomes, but both Finau and Koepka have been rested until Saturday. Tiger Woods and Patrick Reed, the only losing American pair from Friday morning, are also being sat down for the foursomes.