US Amateur champ hits back at slow play critics: "What can you expect?"

Sam Bennett, the US Amateur champion, has hit back at his hater following savage criticism about his pace of play at Ridgewood Country Club. 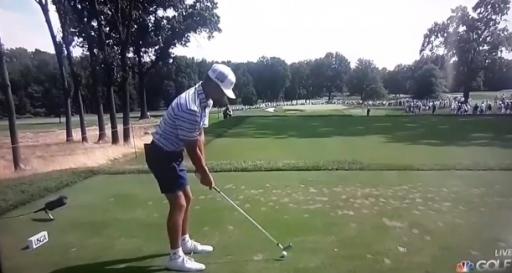 U.S. Amateur champion Sam Bennett didn't only grab spots in three of the four majors next year with his stunning victory at Ridgewood Country Club.

The young American grabbed the attention of golf fans on social media. For entirely the wrong reasons. Slow play, allegedly.

Bennett won the tournament in dramatic fashion with a 1UP victory over Ben Carr on the very last hole. Their 36th of the day.

As you can imagine, it took a long time to get to that point. It is more than understandable. An awful lot was on the line. But that didn't stop tournament watchers on social raging at Bennett's deliberate pace of play.

To some, it was simply unforgivable!

You can judge for yourself:

TWELVE looks to the hole before Sam Bennett pulls the trigger. pic.twitter.com/ZMuB3TZEHD

Getting major, major, major whiffs of Dabo Swinney from Sam Bennett, and THEN sprinkle in the egregious/disrespectful pace of play, the facial hair, the quotes, and the Texas A&M angle. Hate doing it to a college kid, but it’s unavoidable at this point: the fatwa is activated. pic.twitter.com/uyw0jPRV7t

Holy shit you weren't kidding about the pace of play. I had to make sure this wasn't stuck on a loop pic.twitter.com/vPNibIubil

Bennett, 22, recently appeared on Golf Digest's The Loop podcast where he addressed his critics.

In plain and simple terms, he has anxiety and it's always been this way.

"I got a bunch of heat," he told the podcast. "I just want to tell those people: I already have anxiety. It's pretty bad.

"Having anxiety and then getting over a golf ball with all these thoughts in your head, and then put me in that moment at the U.S. Am with the whole golf world watching. I mean, what can you expect?

"It's always been like that. I don't pull the trigger until I'm ready. I mean, it's not a certain amount of looks, it's just kinda whenever I'm ready.”

He added: "It doesn't matter what it looks like. It matters what score you make on the hole, that's it.

Bennett did go on to say that perhaps some of his pre-shot routine was exacerbated a tad by playing on the big stage.

Not that he seems to worry about it!

Next page: LIV Golf want to depose Tiger and Rory over player meeting