Brian Stuard was stood over his ball for almost a minute on the 18th hole in the third round of the Wyndham Championship, attempting to hit his ball around a number of trees. 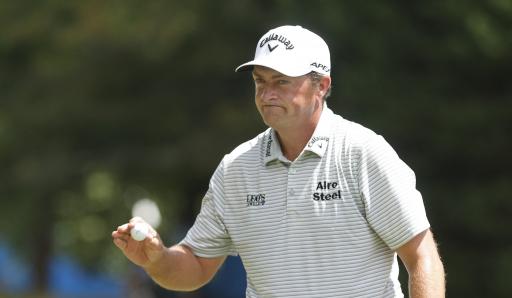 During the second round of The 150th Open Championship, some groups took over six hours to complete 18 holes at St Andrews, sparking some criticism of the layout of the Old Course.

Whether it is the positioning of holes, the length of the course or the participants purely taking too long, slow play will forever be an issue associated with the professional game.

This is an issue that the LIV Golf tour has tried to counteract since its emergence in June and up until its most recent invitational event in Bedminster. LIV want fast-paced, 'don't blink' golf which fans can enjoy.

The Saudi-backed series has implemented a shotgun start format and 54-hole events to enforce their exciting new outlook on the professional game and gain an edge on the PGA Tour.

(And for awhile it looked like Stuard was going to climb inside the top 125 today. The dude refuses to go away, generally speaking. His career makes no sense.)

During the third round of the Wyndham Championship, footage emerged of one player who certainly wasn't showing a fast-paced style of play. In fact, it was the complete opposite.

Brian Stuard found himself in the trees to the left of the 18th hole at Sedgefield Country Club. He was looking to hook his ball around the obstructions and find the putting surface on this closing par-4.

The American was stood over his ball, waggling his club for what seemed like an eternity. He was over his ball for more than 40 seconds before pulling the trigger.

His ball finished short of the green and he went on to make a par. This is not the first time that we have seen Stuard take a considerably long time to play a shot in 2022.

During the Honda Classic in February, the one-time PGA Tour winner seemed to take over 30 seconds to hit a shot, so it would appear this is an ongoing issue which crops up on the PGA Tour with Stuard.