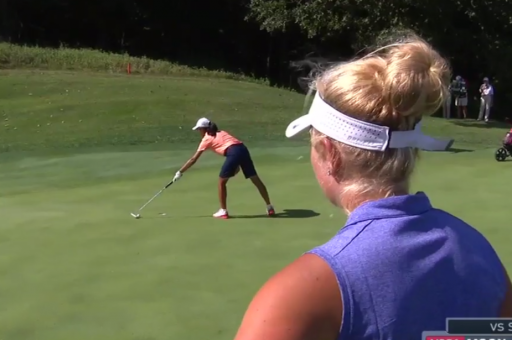 Remember that 2015 Solhiem Cup incident involving Allison Lee and Suzann Pettersen? Well yeah, we're back in that territory once again.

Competing in her semi-final US Girls Junior match, Elizabeth Moon stood over a three-foot birdie putt to move into the final. Only she wound up walking off the green with one of the most painful and bizarre losses ever imaginable.

Moon's attempt for the win on the first extra hole - the par-5 14th at Boone Valley- missed on the low side and trickled a foot past the cup.

Disappointed not to have holed the putt, the 17-year-old pulled it back (that's okay because they're playing matchplay) and tried the first putt again, this time making it.

Her opponent, Erica Shepherd, 16, then said: "I didn't say that was good."

Watch the incident below...

After conferring with rules officials, Moon was given a one-shot penalty for moving her ball (under Rule 18-2) since the putt hadn't been conceded and you can't concede a putt after the fact.

“I thought that since I would have given it to her, it would be just fine,” said Shepherd, who won the match at the 19th hole.

“I feel awful, and I feel like I lost, and I want to cry. I feel bad for her, but I couldn't do anything. We both tried to get it to where that putt was given to her but it just – it's the Rules of Golf. There's no after-the-fact. You can't.”

“I hit my putt to a couple inches. She gave it to me. She had like a 5-, 6-footer for birdie. And, so I closed my eyes, because I thought she would just make it because she had been playing good all day. When I hear that the ball doesn't drop, I finally open my eyes and she's already dragging the ball back. And, then like my coach was like, 'Did you give that to her?'”

It was to be more than just an advantageous outcome for Shepherd as she went on to win the the US Girls Junior Championshop when defeating Jennifer Chang 3&2 in the final.

Her semi-final incident is of similar controversy to the one involving Allison Lee at the 2015 Solhiem Cup when she scooped up a short putt that she believed to have been given to her, but Suzann Pettersen admitted it had in fact not.

So like we've been saying for sometime now at GolfMagic, a gimme is not a gimme unless it's given. Always remember that.

DEBATE: GIMMES - ARE THEY GOOD FOR THE GAME?