A motorist completely tore up the grounds of Painswick Golf Club just days before an annual competition. 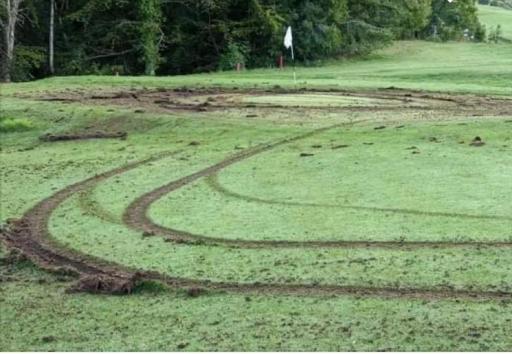 Painswick Golf Club in Gloucestershire has suffered a huge set-back after a motorist completely tore up the grounds of the golf course in an idiotic act of vandalism, in what was described as "the worst damage" committee members have ever seen.

The act of stupidity took place at the picturesque golf club on Sunday night and most of the damage was targeted at the green of the third hole.

In an image uploaded by the Gloucestershire police, deep tyre marks can be seen leading up to the green, where it then looks as though the vandal has spun their car round in circles around the flag, completely destroying the turf.

The incident occurred a week before an annual club competition is set to take place where over 40 members will be taking part.

"We've had vehicles on the course before, but nothing like this - it is the worst damage I have seen," said Billy Daws, compeption secretary at Painswick Golf Club.

The golf club had been closed on the day of the incident to allow members of the public to enjoy the grounds and it wasn't until Monday morning that the damage had been seen.

Gloucestershire Police were called to the scene and then tweeted: "Why on earth would someone do this to one of our golf coures."

The club is now in a race against time to get the grounds repaired before the competition this weekend and Mr Daws said that it is being discussed whether the damage will be patched up or another hole will be played twice.

Anyone with information on the vandalism should call police on 101.