What is going on here then?! Golfers are fuming about this on the green. 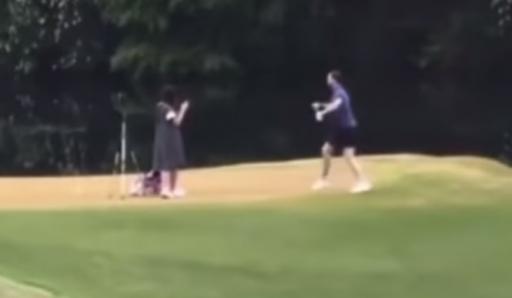 Golfers have been angrily reacting to seeing some bizarre footage of a man dancing on a putting green, no doubt for a Tik Tok video.

The video was initially posted by @rander229 and @breezygolf on Instagram and was then reshared by @thegolfmamba.

We join the footage with a man dancing around a golf club while being filmed by his colleague, with bags and camera equipment all positioned on the green.

The video we see is posted by someone back down on the fairway with the caption "I hate people" with an original audio being played over the top of it.

Now Watch: Danny Willett hits a putter out of the bunker at the RBC Heritage - would you have played this shot?!

"Why did this video make me so angry?" commented one golfer.

"Hit it into the green, that is exactly what I would be doing in this scenario" wrote another.

"It's actually proper etiquette to hit into them," said one golfer.

"These people are going to grow up and wonder wtf was wrong with them making these pointless videos," commented another.

"I’m not hesitating one bit to hit into this green," said one golfer.

"That’s when you unload you entire bag of balls with 4 iron stingers," wrote one golfer.

"Should be thrown out permanently," said another.

Next Page: Golfer throws an epic strop on the golf course as his brand new driver fails to deliver the goods