Was this player penalised for this EXTRAORDINARY double-hit?

If you accidentally double-hit your ball when playing your shot, do you get a penalty? 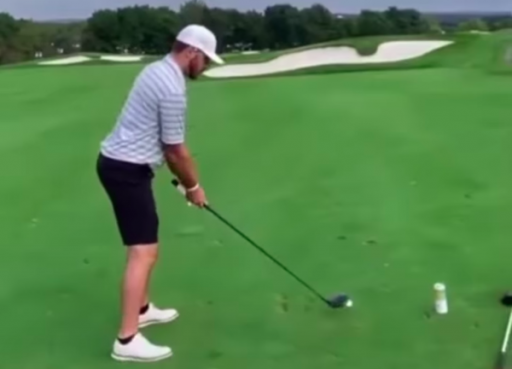 If your playing partner hits a bad shot, you have two options. You can either keep quiet and allow them to self-combust or you laugh out loud and force the humour out of them.

On most occasions, it is better to laugh it off because golf is such a difficult sport to perfect. When the shots are as extraordinarily bad as the one in the video below, you can't do anything but laugh.

In footage posted by golfrules_questions, a player is getting ready to hit his driver. As he hits it, he tops the ball so badly that it pops up immediately in front of him.

As his club gets to the back of his follow-through, the clubhead hits the ball for a second time during the shot. The ball rebounds about 10 yards forwards.

If you double-hit the ball when playing a shot, does this count as two shots or are you let off?

A double-hit does not count as a shot. Although the player has hit it twice, this counts as one stroke and there is no penalty administered.

RELATED: TIGER WOODS: BEING A DAD HAS HELPED HIM STAY FOCUSED ON HIS RECOVERY

This is a valuable lesson for many golfers because this is a rule that could easily be confused. If you see a player double-hit a shot, it is easy to think that another stroke is added on to their score for that hole.

But this is not the case. If you accidentally deflect your ball like in this bizarre video, you simply play it as it lies without a penalty.

golf rules
double-hit
viral video
funny video
penalty
Previous
Tiger Woods: being a Dad has helped him stay focused on his recovery
Next
Lee Westwood reveals the BIG CHANGE he would make at the 2023 Ryder Cup