Watch the brilliant moment when a 100-year-old golfer stepped up at the 100th KLM Open. 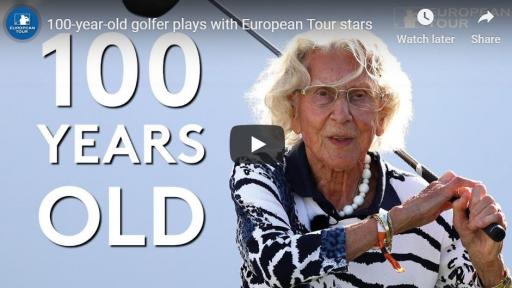 This week, the KLM Open celebrates its 100th edition of the tournament since it first opened its doors in 1912, coinciding perfectly with the sponsor of the event, KLM, with the Dutch airline celebrating their centenary year. With all that in mind, it only made sense to add another '100' to the event, in the form of the 'Beat the Pro' challenge which is taking place every day of the tournament this week.

At the Beat the Pro challenge, amateur golfers are invited to join a group at the short par 3 13th hole, where after the professionals have hit their shots, they have the opportunity to have a go themselves and if their ball finishes clsoer than the professionals in the group, they win flights courtesy of KLM to a destination of their choice.

Joining what was the most exciting group on paper in Matt Wallace, Thomas Pieters and American Patrick, was 100-year-old Susan Hosang. The Hilversum native had a spring in her step as she walked onto the tee, looking absolutely incredible for her age. Hosang started playing golf 30 years ago at the age of 70 and had the opportunity to play alongside some of the best players in the world. Check out her effort below.

After finishing his round, 2017 Masters champion Reed, said: “Just to see her out there being able to swing and to have the energy she had to walk up the entire hole.

“Honestly, it wasn’t that bad of a golf swing and it is one of the fun things they have done here on the European Tour at this event and hopefully she can continue playing golf.”

Pieters said: “She didn’t look like she was 100, I’ll give her that.“She looked like she was 75 or 80, so wonderful for her age and she was walking fast to the green. I think she beat me almost, so she did very well.”