WATCH: Is ANYONE cooler than Fred Couples on the driving range?

Fred Couples is known for his silky, cool swing, but he excelled himself while practising in this fantastic footage. 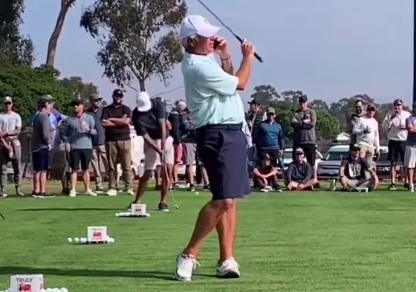 Golf is a game of beauty and much of that beauty comes from the amazing swings that we see from our favourite professionals every week on the PGA Tour.

Louis Oosthuizen, Ernie Els and Adam Scott are just some names that you should go and watch at an event if you want a lesson on tempo and rhythm.

However, surely the king of cool and the silky swing of Fred Couples takes first prize. It looks as if the former Masters champion plays without a care in the world on the PGA Tour and the PGA Tour Champions.

The popular American, nicknamed 'Boom Boom' for his power, is calmness personified on the golf course and this has helped him to 15 wins on the PGA Tour in his career.

One of the most iconic moments in recent memory that Couples produced was at the Players Championship in 1999 when he made a famous hole-in-one.

At the par-3 17th hole, the enemy of many golfers, he hit his ball in the water in his first round. He put another ball down and holed it for an incredible par.

He walked off as if nothing had happened and lifted his cap to the crowd. It is this sort of relaxed nature that Couples displays today and in the video above.

On the driving range surrounded by other golfers and spectators, the 62-year-old is hitting balls with one hand whilst on the phone to someone with the other hand.

If most of us tried this, we would struggle to even make contact with the ball, let alone sweep it off the surface like Couples is doing in the video.

His style and rhythm have given him a large fanbase since he turned professional in 1980 and he will always thrill fans for as long as he plays on tour.