Bryson DeChambeau and Martin Borgmeier have started a new Instagram page, but what exactly is it? 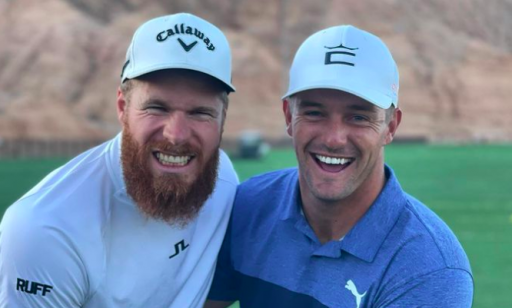 Bryson DeChambeau has found a new passion for life in Long Drive. There is hardly a day that goes by where he doesn't post a video of himself bombing balls down the driving range.

In September after the Ryder Cup, the 28-year-old teed it up in the Professional Long Drivers Association World Championship. He impressively came seventh.

In his debut in such a competition, this was an incredible effort as he was competing against out-and-out big hitters and not fellow professional tour players as such.

He has built a close bond with some of the other Long Drive hitters, including the German Martin Borgmeier, who first entered Long Drive contests at national level in 2017.

In 2018, he came top of the European Tour rankings in his rookie season. His highest ever ball speed is 226 mph and his longest ever drive in competition is 436 yards.

The pair have practised together before and now, they have started a new Instagram platform called Regecy, along with popular social media golfer Hogan Molthan.

Molthan has just short of 700,00 followers on TikTok who watch his videos which are based around his golf career and fitness regime.

These three athletes are tagged in the bio of the new Instagram page which also says 'Coming Soon'. However, we are none the wiser as to what is actually coming soon.

As they all share a mutual passion for golf and Long Drive, we could expect to see a lot of bombs being hit on the driving range.

DeChambeau's dedication to his long game has led to him becoming a major champion and an eight-time PGA Tour winner, while it has also helped Borgmeier become a European champion in his own discipline.

Fitness and gym videos are also other pieces of content that we could expect to see from the new Regecy platform. Make sure to keep your ears to the ground and watch this space for further updates.

NEXT PAGE: TONY FINAU TO HAVE BILLIONAIRE CADDIE AT HERO WORLD CHALLENGE ON PGA TOUR