WATCH: Is this the BIGGEST club throw you have ever seen?

This angry golfer couldn't contain his frustration and with one swing of his arms, he performed the biggest club throw we have ever seen. 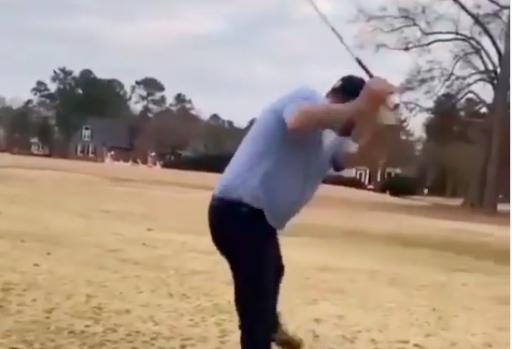 We have all been angry and frustrated on the golf course. I will admit that I have done a spectacular club throw on one or two occasions in the past.

Sometimes when you hit a bad shot or you are having a bad round, it is impossible to hold in your tension. Sometimes, it is good to vent your feelings.

However, I would never encourage anyone to throw a club because it is poor behaviour and it is not the sort of thing you should be doing on the golf course.

If your playing partner or friends become annoyed and throw their clubs, it can be very funny even though you are laughing at their expense.

This was the case in the video above. This big golfer is clearly unhappy with his shot and after he sees where it goes, he delivers what must be the biggest club throw ever performed on a golf course.

The player pulls the club back and bends down. He bends his arms as if he is about to absolutely smash a driver and then, he swings forwards.

The club goes flying through the air and this man's playing partners start laughing before they realise where the club is travelling to.

After a brief moment of fear and anticipation, the club does not hit anything or anyone and appears to just land in an area of rough and long grass.

It is unclear as to where his initial shot went and we don't know where the ball ended up. But there is a good chance that the club could've gone further than the ball.

NEXT PAGE: PATRICK CANTLAY IS A "CURIOUS OBSERVER" OVER RIVAL GOLF LEAGUE