Cameron Smith was filmed in a pub partying with his fans after the LIV Golf superstar sensationally won the Australian PGA Championship. 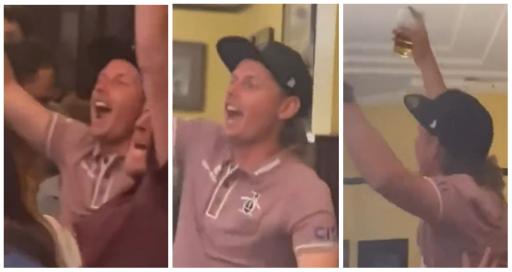 It's fair to say when Cameron Smith emerges victorious, he knows how to party.

When Smith won the Claret Jug in July, footage emerged of the Australian hilariously trying to wedge the trophy in overhead storage as he rode coach on the way back home.

Upon his return, Smith - who joined LIV Golf this summer for a reported $140m fee - was filmed chugging beer out of the trophy with his pals.

Now we have this latest footage following his sensational Australian PGA Championship victory at Royal Queensland.

It was an emotional homecoming for Smith. It was the first time he had played a golf tournament in his homeland for more than three years because of the pandemic.

He admitted that he didn't know if he had enough in the tank to win, but he got the job done and won the event for the third time in his career.

Smith later dedicated that victory to his father Des - who was celebrating his birthday last Sunday - and his grandmother Carol who is battling cancer.

Carol proudly walked all 72 holes alongside her grandson.

Now footage has emerged of Smith enjoying the victory in the pub a short time later.

You can watch the footage below of Smith enjoying his final putt before being raised into the air.

The tournament will be played with both men and women participating.

Smith will be playing the first round alongside Matt Jones and Poland's Adrian Meronk.

The tournament is being played for the first time since 2019 due COVID-19. The last person to win the tournament is the aforementioned Jones, who also plays in the LIV Golf League and is one of Smith's teammates in the all-Australian Punch GC side.

Smith has been in the news again recently owing to his comments about the Official World Golf Ranking situation.

The 29-year-old said it was "a pain in the bum" he didn't move up from his No. 3 position following his Australian PGA Championship win.

Rory McIlroy and Jon Rahm are just two players who have different opinions over this.

Tiger Woods took a strong position on the subject too when he spoke before the Hero World Challenge on Wednesday, saying he believed the current system is flawed.