Cameron Smith on missing out on World No.1: "It's a bit of a pain in the bum!

LIV Golf's biggest signing Cameron Smith has revealed missing out on the World No.1 spot after his fifth victory of 2022 is "a bit of a pain". 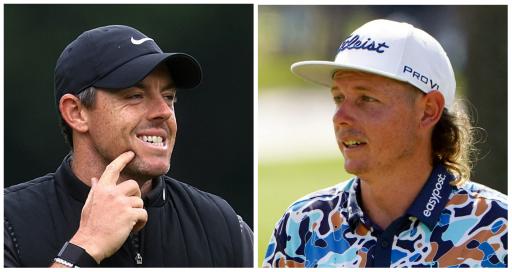 Cameron Smith says he won't lose sleep over missing out on the World No.1 position after his stunning victory at the Australian PGA Championship but he conceded: "It's a bit of a pain in the bum."

It was an emotional homecoming for LIV Golf superstar Smith last week at Royal Queensland.

He was playing in front of a boisterous home crowd who hadn't seen him compete in the flesh for more than three years.

During that time away Smith established himself as a superstar on the PGA Tour, setting scoring records and winning the Players at TPC Sawgrass after an epic finish that included almost finding the water and finding the water on the final two holes.

Smith also won the landmark 150th Open Championship at St. Andrews in July as Rory McIlroy struggled to tick off the birdies he so desperately needed.

McIlroy has this week opened up on this disappointment further as he revealed both he and Tiger Woods' preparations for the major were hampered as they both contracted COVID19.

After Smith's Open triumph he joined the LIV Golf League for a reported $140m. He won LIV's Invitational in Chicago, taking down $4m.

His victory in Brisbane last week was his fifth individual title of 2022. It's impressive stuff, yet he hasn't moved an inch in the Official World Golf Ranking.

The aforementioned McIlroy has offered his thoughts on the world ranking debacle, claiming he believes the system is fair.

Jon Rahm disagrees. As for Smith, he complained about the rankings before teeing it up last week.

Smith was almost reduced to tears as he dedicated his three-shot victory to his grandmother Carol, who is battling cancer.

Now he has given an interview to The West Australian, where he admitted surprise that "somehow" he's still No. 3 in the world.

"It is a bit of a shame, but it is what it is. I've kind of had to deal with that for the last three or four months.
"I feel like I'm playing some really, really solid golf and, yeah, it's a bit of a pain in the bum."

"I know in myself that I'm right up there. I'm still third on the [OWGR] list somehow but, as time goes on, those rankings become more and more irrelevant, especially with not getting world ranking points in those LIV events.
"It's a shame that a big event like the PGA and the Open get so little points, especially for us Aussie guys who don't really get an opportunity.
"Especially the guys coming up, [they] don't really get an opportunity to win a lot of points. As a young professional, those points mean quite a bit."

The world ranking debate has become increasingly bitter in recent months. What happens from here remains to be seen.

DP World Tour chief executive Keith Pelley said in Dubai earlier in the month they would be presenting both of McIlroy and Rahm's views to the next OWGR board meeting.