Ian Poulter struggled with his yardages on the 13th hole of the HSBC Abu Dhabi Championship on the DP World Tour. 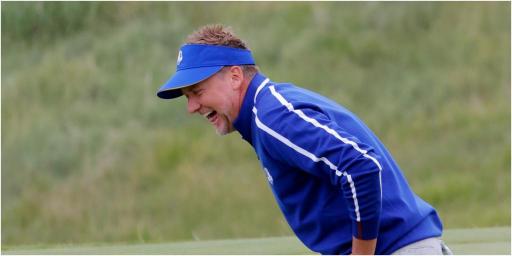 Ian Poulter will tell you that a general rule of thumb at the pinnacle of the professional game is to know your yardages.

It can be the difference between setting up a glorious birdie opportunity or trying to save par if you send one through the green.

Poulter was in blistering form on his front nine on day one of the HSBC Abu Dhabi Championship on the DP World Tour.

He made five birdies in his opening six holes as fans suggested he was most definitely on 59 watch at the first Rolex Series event of 2022.

Poulter made the turn at 6-under par at Yas Links on a low scoring day.

Birdies at 11 and 14 followed but at hole 13 things really turned into a scene from a comedy sketch show.

Poulter needed the number. Viewers were reliably informed he only had 125 yards to the pin as he consulted his yardage book.

The Postman wanted to confirm with his caddie that the pin was 33 yards on and three from the right.

Except he was a few yards out.

"No it wasn't," came the response from his carrier.

"Were you p***** when you did the pins last night or something?"

Well, we can all relate to that. Poulter found himself three strokes behind the lead on day one.