It is not every day that you encounter a large bear on your local golf course and this golfer wanted to hole this putt before he was gobbled alive. 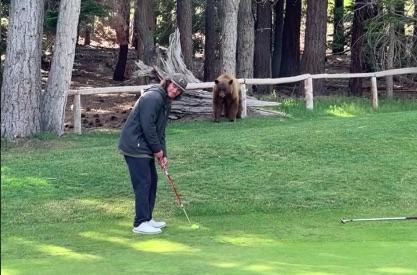 On various golf courses around the world, you can encounter many types of animals, but it isn't often that you see a large bear in your company.

As you can see in the footage below posted by veganbeefjerkey, the bear is standing on the edge of the trees and it is taking a keen interest in the golfer's round.

You have to respect this player for holding his nerve in the presence of such a huge beast. It must've been impossible to concentrate with a pair of hungry eyes staring at you.

It is a very long putt and even without a bear watching over your shoulder, it is a tough putt to make. Only the top professionals on the PGA Tour would expect to roll this one in.

Playing with a yellow ball, the player hit the perfect shot and he rolled it into the bottom of the cup. Throughout the footage, the bear remains unmoved.

There was no applause from the animal, nor was there any sign that he wanted to pounce. The bear remained respectful and kept the noise down while the player played out.

"Bear: if you make the putt, I’ll leave you alone," one fan said.

"The ‘I got your back’ is what got me, like he would step up if there was an altercation," one fan commented.

"The bear: as soon as he makes this putt I’m eating him," another fan commented.

"Play better under pressure just escalated to a different level," one fan said.