After a glittering amateur career, Eugenio Lopez-Chacarra has forfeited his PGA Tour status to side with the riches of the LIV Golf Invitational Series. 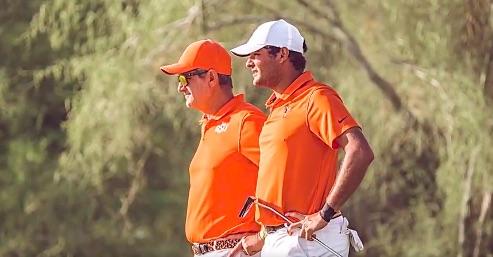 Eugenio Lopez-Chacarra, the World No.2 amateur, is set to join the LIV Golf Invitational Series after turning professional.

Lopez-Chacarra has made three starts on the PGA Tour this season, but now, he has cast future involvement on the circuit into serious doubt.

The Spaniard attended Oklahoma State University where he won three times in his amateur career and this took him second in the world rankings.

He won The Amer Ari Invitational in February and more recently, he won the NCAA Columbus Regional in May. He was named the ACC Freshman of the year in 2019.

According to MARCA, Lopez-Chacarra has been offered between £8 million to £15 million on a three-year contract. The offer has been described as "unrejectable."

"My position is that of a player who is not a member of the PGA Tour or the DP World Tour and I have not earned money while I have been an amateur, so I can play in this league without problems," he told the Spanish paper.

"This contract gives me peace of mind and ensures the future of my family. (I) have already achieved everything as an amateur and now I will be able to gain experience as a professional.

"When I spoke with my coach, he told me not to hesitate to go, because I was going to play with PGA tournament winners and I was going to learn a lot."

The promising golfer will be one of the youngest players to tee it up in the LIV Golf Invitational Series and it marks an investment in youth as well as players at the end of their professional careers.