Harry Kane capped off his first day playing the Icons Series in New York by sinking this downhill slider from 18 feet. 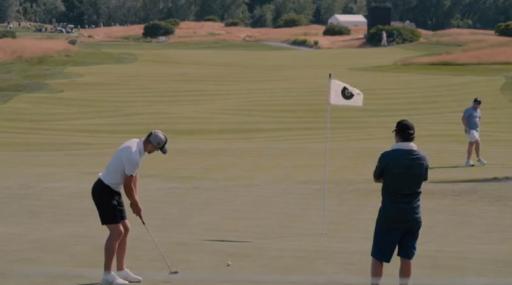 Kane was taking on former NBA star JR Smith and ex-baseball pitcher J. Scholtz in New York but managed to keep his cool and slam home this tricky downhill putt.

Also playing in Kane’s group as his teammate was former tennis player Ash Barty, from Australia, who shocked the sporting world by announcing her retirement aged just 25.

She pointed to her desire to chase new dreams and it appears that golf is what she wants to pursue now, and she is proving it in New York.

The Icons Series pits a team of sporting stars from the United States against a team from the rest of the world.

Fred Couples, who ripped into Phil Mickelson this week, is the skipper of the US team whilst Ernie Els is the captain of the ROW team.

Sinking an 18-foot putt… for @HKane it’s as easy as scoring a penalty.  #IconsSeries pic.twitter.com/a25vtvs8NU

Kane and Barty managed to pick up a point in the greensomes against NFL quarterback Ben Roethlisberger and former running back Marshall Faulk.

It was an otherwise miserable day for the ROW team, as they trail by five points. The score is currently 10-5 heading into the final day of action.

Also playing in the Icons Series alongside Kane is Liverpool’s James Milner. He was the standout performer on day one as he won both his fourballs.

What are the teams?