Fred Couples on Phil Mickelson: "Have you ever seen him look so stupid?!"

Fred Couples has revealed he will "never" talk to LIV Golf defector Phil Mickelson ever again. 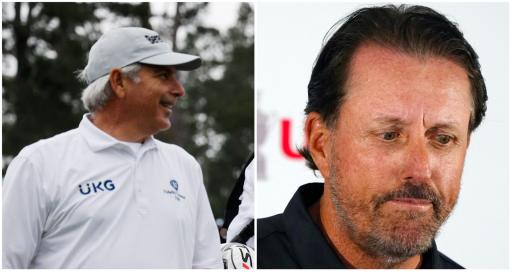 Speaking to Golf, Couples, 62, explained that he doesn’t think he will ever talk to Lefty again and that if he were to join the Saudi-backed series his family “would disown me” because of the source of the money.

The second LIV Golf Invitational series event, which has a total prize purse of $25m, is being played over the next three days at Pumpkin Ridge Golf Club in Portland, Oregon.

Mickelson is joined by Brooks Koepka, Bryson DeChambeau and Patrick Reed who are making their debuts in the controversial circuit. Reed, in particular, absolutely ripped the PGA Tour this week.

“I don’t think I’ll ever talk to him again,” Couples told the publication.

“What for? I’m not in the same boat as him anymore, and probably never will play golf with him again.

“I’m not saying that to be mean. We’re just in different orbits.”

He continued: “These guys - you’ve seen their interviews, right?

“Have you ever seen Phil look so stupid in his life? They know it’s a joke. They’re all saying they want to change golf; they’re doing it for the better of golf.

“No one has said that. You know why? Because they’re not going to be around in three years.”

Also among the PGA Tour defectors is Pat Perez.

Perez explained that he felt like he “won the lottery” in a tense press conference earlier in the week.

The American explained he had “no concerns” over the source of the money he is receiving.

He then turned heads when he turned up a LIV Golf party wearing a shirt with dollar bills printed on it alongside his wife.

Couples, who won the 1992 Masters, added of Perez: “I heard of all people Perez was a little confrontational,” Couples told the publication.

“He’s a grain of sand in this Tour. He should be soft and kind, but he’s, like, raising his voice. I’m done with it.”

“I think this is a family thing for me. I’m a little peon from Seattle, but I know where the money’s coming from, and I think my family would disown me if I went.

“Of course, that’s easy for me to say because I’m not going, so I can actually tell you whatever I want to tell you.”

Next page: Player in OWGR top-10 "will join LIV Golf"