WATCH: How would you play this IMPOSSIBLE Tiger Woods bunker shot?

Tiger Woods was faced with an impossible bunker shot at The Open Championship. Could he have played this any differently? 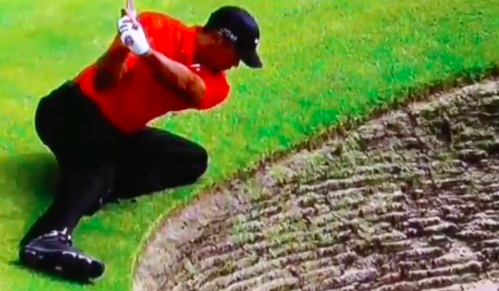 At The Open Championship, or basically any links golf course, you can be faced with some very difficult shots and situations.

Footage of Tiger Woods playing at The Open was posted on social media and it was a classic example of how links golf courses can punish you in cruel ways.

Woods' ball finished in a bunker but sat up against the lefthand wall of the trap. For a righthanded player like Tiger, this is an almost impossible shot.

The 15-time major champion had to go down on his knees on the ground so that his clubhead could reach the ball. Not an ideal stance at all.

As he waggled his club and prepared himself for the shot, he extended his right leg to add as much stability to the shot as he could.

Woods played the shot and it was almost an amazingly played stroke. His ball clipped the top of the greenside bunker and rebounded to the right.

Fortunately, his ball stayed above ground and he managed to find the putting surface. Although the ball hit the lip of the trap, Woods would have been relieved with the outcome.

RELATED: COLLIN MORIKAWA DID SOMETHING HE HAS NEVER DONE BEFORE AT THE ZOZO CHAMPIONSHIP

The legendary golfer trudged away looking disappointed, but many of us would have been very pleased with the result of this shot. Tiger obviously has higher standards and that is why he has been so successful in his career.

If Phil Mickelson and Bubba Watson had to take on this shot, it would be much easier as lefthanded players. It was an amazing shot from an almost impossible position.

NEXT PAGE: HIDEKI MATSUYAMA: WHAT'S IN THE BAG OF THE ZOZO CHAMPIONSHIP WINNER?

Golf news
Golfer pauses longer than Hideki Matsuyama then SMASHES HIS TEETH with tee shot
Golf news
Could you pull off this AMAZING recovery shot through the trees?
Golf news
Fostered girl, nine, is on her way to The MASTERS for the Chip, Drive & Putt
PGA Tour
Tiger Woods and son Charlie Woods could return at PNC Championship
Best tips and instruction
Lee Westwood URGES all golfers to repair their PITCH MARKS this winter