It appears one of the best ball strikers since Tiger Woods burst onto the scene is also capable of the dreaded S word. 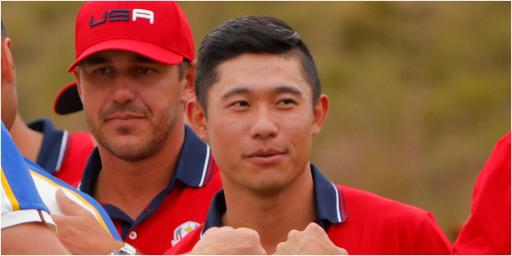 Collin Morikawa is widely regarded as the best ball striker in the world and he's only 24 years old.

But the young American proved he is human after suffering a case of the dreaded shanks at the ZOZO Championship in Japan.

Playing his third round at the Accordia Golf Narashino Country Club Morikawa stepped up on the par-5 sixth hole.

Unsurprisingly, Morikawa found the short stuff and he took his address position aiming straight for the pin.

Things to expect from Collin Morikawa after every round: honesty. pic.twitter.com/UGOIgk4Fud

Yet Morikawa, who went 3-0-1 at the Ryder Cup, found the hosel of his TaylorMade P730 pitching wedge.

The youngster didn't have to admit this because it happened so early in the round nobody caught the moment on film.

It's a shame, because it would certainly be something we'd like to see to prove he is mortal.

Instead he told the media at his press conference: "Well, I did something in my career that I haven't done yet... (which) was shank a shot.

"I don't think many people know this. I was in the middle of the fairway on six, the par-5.

"Yeah, shanked a pitching wedge straight in the trees. So really good way to start the day after being 1-under through five."

Morikawa then made bogey and battled it out in the tough conditions to card a 3-under 67.

Reply with a GIF that describes @Collin_Morikawa's swing. ⬇️ pic.twitter.com/GG9AKkWPmi

RELATED: CAN ANYONE STOP HIDEKI MATSUYAMA IN JAPAN?

NEXT PAGE: DUSTIN JOHNSON AMONG EIGHT WANTING TO PLAY IN SAUDI