WATCH: Is this one of the most INCREDIBLE putts you have ever seen drop?!

As far as putts go this one is right up there with some of the best ones we've ever seen, but could he do it again? 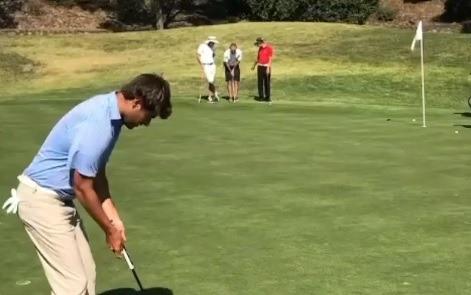 How often do we have moments where we sink those ridiculous putts once in a blue moon?

They come along every so often but we rarely catch them on film and they become another story in the clubhouse you rarely believe.

But sometimes they are captured and then the clips spread like wildfire on social media as we find it difficult to believe what we've just seen.

Another clip has surfaced on the popular Instagram page @golf_gods showing another great clip.

Here, our hero sends a massive putt left of the hole up a ridge behind the green before it trundles its way back to the hole...and in.

It drops in perfectly to the delight of his playing partners and reminds us of that scene from Space Jam.

You can check out the clip below:

Suffice to say it is perfectly judged and reminds us why this game never gets boring for us amateurs.

It delivers these moments.

So far the video has been viewed more than 130,000 times and is rising.

The putt reminded us over at GolfMagic of this one below.

Great putt, but unfortunately this player breached the rules of golf.

We're fairly certain he couldn't do this again if he tried!

NEXT PAGE: WILL TIGER MAKE IT TO THE MASTERS?