The Korean shot her 14th consecutive round in the 60s on her way to her third victory of the LPGA Tour season and matched a record held by Annika Sorenstam. 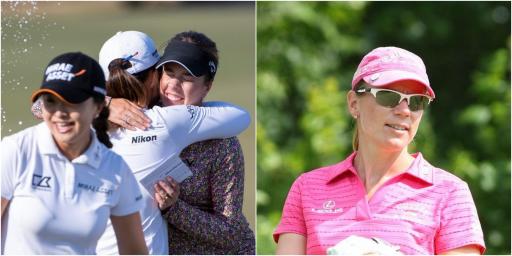 Jin Young Ko secured her third LPGA Tour victory of the season this weekend and equalled a record held by hall of famer Annika Sorenstam with a wire-to-wire win.

World No. 2 Ko signed for a 5-under 66 on the final day at the Mountain Ridge Country Club in truly horrific conditions to claim the win at the Cognizant Founders Cup in New Jersey.

With the win Ko joins Nelly Korda as a three-time winner in 2021 while her final round was incredibly her 14th consecutive sub-70 round and matched the tally Sorenstam secured during her season in 2005 where she won 10 times.

Ko already made the record books in 2019 when she broke the record held by Tiger Woods for the most consecutive holes played without a bogey.

She played 114 straight holes at par or better, beating Woods' record by four.

Jin Young Ko is on a roll. pic.twitter.com/j3oGAH4ZEk

Ko's first two wins of the year came at the Volunteers of America Classic and the Cambia Portland Classic, which means she is just the fifth Korean to claim double-digit LPGA Tour titles.

"This win is my 10th career win, so this is really special," Ko said. "I had a lot of the pressure on the course. I knew I'm defending champion and I knew a 60s score beat Annika's [Sorenstam] record."

Nelly Korda has been the standout performer so far this year. She won three times, claimed her first major and claimed the gold medal at the Olympics but Ko's form means there could be a twist so far as the LPGA player of the year is concerned.

There are only three events left as some had to be cancelled due to the ongoing pandemic.

Jin Young Ko fired a final round 66 to defend her title at the 2021 Cognizant Founders Cup!

Watch her final round highlights! pic.twitter.com/JTy5ZnYBma

RELATED: IS THIS THE MOST EXCITED WE'VE BEEN ABOUT A TIGER WOODS COMEBACK?

NEXT PAGE: BRYSON DECHAMBEAU ON HOW GOLF BALL DIMPLES TRANSFORMED HIS PUTTING

LPGA Tour
Tiger Woods
Annika Sorenstam
jin young ko
nelly korda
Previous
"You make NOTHING": Bryson DeChambeau on financial perils of the PGA Tour
Next
Are you penalised for hitting a moving ball in this STRANGE situation?