Sir Nick Faldo saw the funny side of this great clip from a very windy golf course in the UK. 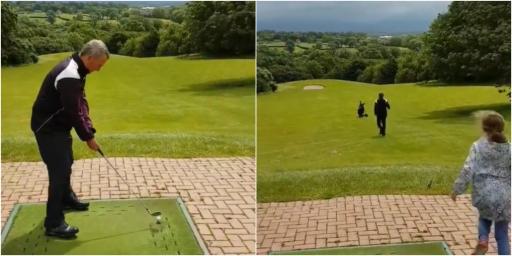 Golfers are interesting creatures. Creatures of habit. Absolutely nothing will stop them getting in that weekly (or daily round).

Despite the fact there was a severe weather warning in the United Kingdom due to Storm Dudley, some brave souls still ventured out.

Would they still score well? Probably not. I mean some of the windy conditions this week would have been absolutely brutal to play in.

The Met Office confirmed that winds were gusting up to 90mph. There were damages to homes and cancellations of public transport.

There were concerns that Storm Eunice could bring coastal flooding to the west, south-west and south coast of England.

Well, even though it's a bit gusty out that still doesn't prevent amateur golfers from getting out there and amongst it.

This one clip surfaced this week and we at GolfMagic absolutely love it. Is this golf cart Fenton in disguise?

If you don't recall, Fenton the dog wreaked havoc nearly 10 years ago in a London park when his irate owner tried to stop him chasing deer.

That didn't end well. "Oh Jesus Christ. Fenton!" he bellowed. If you remember, that did not end well.

I mean look at this. Even Sir Nick Faldo got in on the act and suggested it was a 14 club wind!

Take a look at the video below