WATCH: Which of these AMAZING TRICK SHOTS is your favourite?

This video contains a series of amazing trick shots which are extremely hard to complete. But which one is your favourite? 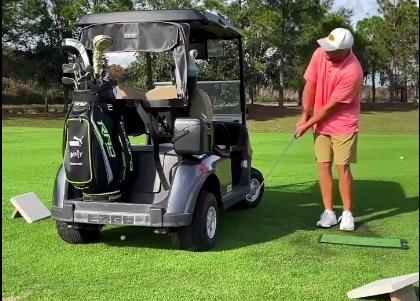 Golf trick shots are amazing. The golfers that hit them spend hours practising and perfecting their technique and strategy in order to hit the shot.

Some trick shots are even hard to believe. Social media is a fantastic place to find them and you are never far away from an account that has an endless supply of them.

In the video below, posted by golflover2461, there are four incredible shots that each require a lot of skill and imagination. But which shot is the best?

This shot defies belief and you have to applaud the ingenuity of the creation. But this is just the start. For the second shot, the golfer pushes his trolley away from him.

As it rolls away, the man hits his ball off the plate and the ball, once again, goes straight into the tube and down into the ball collector.

The lefty takes a similar route with the third shot. He hits his chip against the plate and his golf ball rebounds directly the other way and behind him.

The little white circle finds the tube of the ball collector again. We are now on to the fourth and final trick shot. Have you been sufficiently impressed up to this point?

The final one is similar to the third one. The player hits his ball against the plate and it rebounds behind him. But this time, the ball lands perfectly into the top of a traffic cone.

They are all amazing in their own right and it must've taken hours of hard work to complete each one. Which one is your favourite?

NEXT PAGE: BRYSON DECHAMBEAU "OFFERED" $135MILLION TO BE FACE OF RIVAL LEAGUE