WATCH: Why this grandma faced with awful bunker stance REGRETS playing the shot

Comments on the video included: "We hope she raked the bunker". 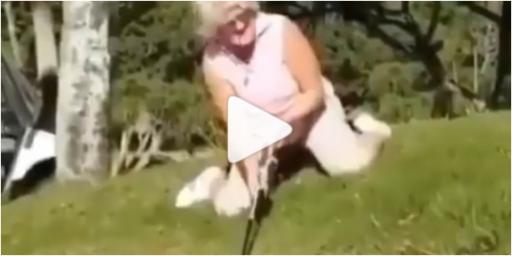 Sometimes in life you just have to laugh when the outcome of a shot goes exactly as you would expect.

Faced with an impossible lie from the pine straw? Shank. Stuck in the long crass faced with a shot over the water? Wet.

When you pull off these shots it reminds us why we play this game but when they go wrong they can be downright hilarious.

You're faced with two options, either join in with the laughter or sulk and go home and come back another day.

A golf video has gone viral on the Instagram page @ziregolf which shows a lady faced with a terrible bunker shot.

Honestly, I admire the effort pic.twitter.com/2PFibAHksh

Dressed in all white, she has no stance and is on her knees with a sand wedge in hand as she attempts to play the shot.

Getting it out anywhere on the green would be considered a great shot.

With one almighty thump she attempts to get the ball out but unfortunately things - as you'll see - don't go her way.

The ball fails to pop out and that's where things really go askew as the woman loses her balance and falls straight in.

She can be seen remonstrating with the person behind the camera as she lays in the bunker in the aftermath.

Let's hope she didn't hurt herself and can return to the fairways another day.

One thing is for sure though.

And that is we admire the effort.

RELATED: IS THIS THE CRAZIEST BIRDIE YOU'LL SEE ON THE PGA TOUR?

RELATED: WHAT THE GOLF GEAR YOU BUY SAYS ABOUT YOU

NEXT PAGE: HOW BEING A DAD HAS HELPED TIGER WOODS' RECOVERY