CJ Cup: Joaquin Niemann SHOCKED as he pulls off a crazy birdie on the PGA Tour

This may be the wildest birdie you will see on the PGA Tour this year. 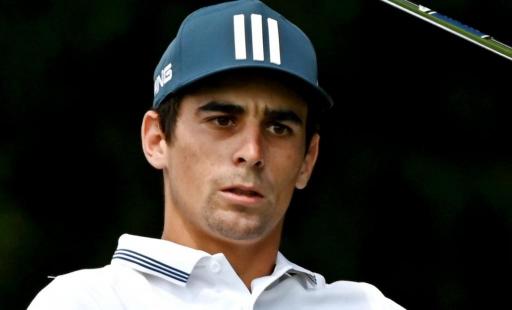 Joaquin Niemann is a bit of a birdie machine on the PGA Tour but the one he just made will go down in history.

His reaction tells the story as he looks absolutely flabbergasted at what he just did but first let's let the scene at the CJ Cup as Niemann stood on the tee to begin his second round.

Niemann sent a wild drive that went so far right on the 385-yard par-4 that he needed to take an unplayable from the desert at The Summit Club in Las Vegas.

He was standing on the wrong fairway and couldn't even see the pin when he grabbed a wedge and took aim from 74 yards.

Take a look at the result:

It certainly was a wild ride and shows how this game can take everything from you and then give it back in an instant - so never give up.

Niemann, 22, looked absolutely shocked at the result and no doubt this birdie will go down in PGA Tour history as one we will watch "from the vault".

The Chilean golfer was partnered with Charley Hoffman and Jason Day for his round on Friday and they too were equally delighted with what they saw.

Keith Mitchell has the clubhouse lead through 36 holes at 18-under and has a five stroke lee over Jordan Spieth, who has returned to some good form.

Niemann is currently tied for 28th at 8-under for the tournament after signing for a 3-under round of 69 in Las Vegas.

RELATED: WE WILL SEE ANOTHER TIGER WOODS